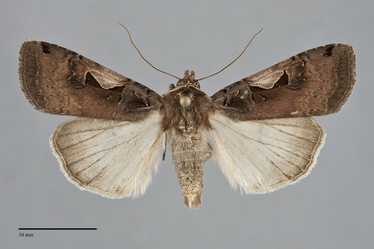 Xestia c-nigrum is a very common, medium-sized to moderately large noctuid moth (FW length 16 - 20 mm) with reddish brown males and purplish gray females that are similarly marked with a pale ochre, V-shaped mark at the costa. Males are medium-dark reddish brown with a slight purple hue, while females are dark purplish gray. The base of the forewing is purplish gray in both sexes. The terminal area is dark gray in males and barely darker than the ground color in females. The costa is pale across the median area, palest anterior to the orbicular spot, and has a distinct black spot medial to the subterminal line. A thick basal dash widens and becomes diffuse lateral to the basal line. The basal and antemedial lines are double, gray and black, and are most evident in the males due to their lighter color. The lightly scalloped postmedial line is very faint in both sexes. The light subterminal line is faint, usually broken into a series of short segments. The orbicular spot is a broad "V" or "U," open to the costa and pale ochre to tan similar to the adjacent costa. The reniform spot is outlined in an outer thin black line and an inner pale ochre to orange line. It is filled with burnt orange anteriorly and purplish gray at its inferior end. The claviform spot is black but relatively inconspicuous. The male hindwing is whitish gray, slightly darker gray toward the margin, with barely darker spot and veins and a pale gray fringe; that of the female is similar but darker gray. The head and thorax match the forewing ground color in both sexes except that the collar is pale ochre with thin dark horizontal stripes and a black edge. The male antenna is filiform.

Both sexes of this species are easily identified by the pale V-shaped mark formed by the fused orbicular spot and pale costa on the anterior aspect of the proximal median area. Xestia dolosa, a slightly larger similarly patterned species that occurs east of the Rocky Mountains, resembles females of X. c-nigrum but has not been found in our area and is unlikely to occur here

Xestia is a large and diverse genus found throughout temperate, alpine, and arctic portions of the Northern Hemisphere. The genus is subdivided into three subgenera, Xestia, Megasema, and Pachnobia, by Lafontaine (1998). The genus is defined by a thumb-like ventral extension called the pollex which arises from the base of the clasper of the male valve. Over half of the North American species are found in the Northwest. Xestia c-nigrum belongs to the subgenus Megasema.

Larva is smooth, mottled pale brown with darker dorsal-lateral chevrons and a wavy black lateral line.  It is illustrated by Lafontaine (1998).

This species is widely distributed in open, disturbed habitats throughout much of Eurasia and North America.  Adults are highly vagile and disperse widely between disturbed areas of habitat.  In the Pacific Northwest, it is often common in moist grassland and forest habitats, particularly in riparian zones along creeks and rivers at low to middle elevations both west and east of the Cascades.  However, it is most common to abundant in disturbed agricultural and urban habitats, and may cause serious damage to crops during epidemic outbreaks.

Xestia c-nigrum is found throughout most of the Pacific Northwest, although it is uncommonly collected in the dry interior of south-eastern Oregon and southern Idaho.

This species has a Holarctic distribution and occurs widely through the Old World and New World. In North America it occurs from the subarctic to central America, although it is absent from the Deep South, Great Plains south of Nebraska, and much of the Great Basin.

This species is a climbing cutworm that is a very broad generalist, feeding on many kinds of hardwoods, herbs, and grasses.

This species frequently causes serious damage to agricultural crops during epidemic outbreaks.  In the Pacific Northwest, it is particularly a pest in herbaceous crops of peppermint and alfalfa.