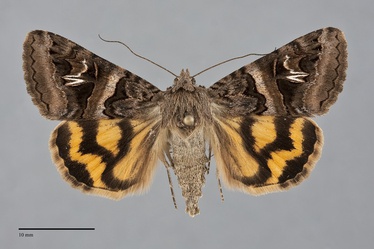 Drasteria divergens is a common, fairly large Drasteria (FW length 16–23 mm) with brown forewings and orange-yellow hindwings. The forewings are dark brown, lighter brown in the median area and light to dark brown or blue-gray in the terminal area. The transverse lines are double. The wavy antemedial line is filled with dark brown and is prominent, and the area between the postmedian line and subterminal line and the filling of the crescent-shaped reniform spot are similar. A prominent mark is produced by white along the lateral reniform spot and veins M3 and CuA1 from the inferior reniform spot to the laterally expanded postmedial line. The hindwing is orange-yellow, paler in populations from forested locales and deeper orange from steppe populations (see below). The hindwing markings are black. The reniform is elongate and is fused to the wavy postmedial line. The marginal band is bilobed, occasionally separated into two spots. The head and thorax match the forewing color. The antennae are ciliate in males and simple in females.

This species is most similar in size and overall appearance to Drasteria parallela. This species has a "busier" appearance of the forewing due to more lines than in D. divergens. In particular, the median line of D. parallela is comprised of two parallel lines of similar strength that tend to be darker and more distinct than those of D. divergens. The terminal are of D. divergens is wider that the posterior median area in D. divergens, and the outer portion of the subterminal line is faint. In D. parallela, the terminal area is narrower than the median area and the outer dark portion of the subterminal line is prominent. The forewing fringe of D. divergens is uniform brown, whereas that of D. parallela is weakly checkered. Small specimens of D. divergens also resemble the yellow-hindwing form of Drasteria hastingsii, but the hindwing discal spot of D. divergens is extended to join the postmedian line, unlike in D. hastingsii, where these are widely separate.

The "form" socia (Behr), type locality Ft. Tejon, California is considered to be a synonym of D. divergens. In our area, steppe populations with blue-gray terminal area color and more orange hindwings with thinner black markings appear to be of this type, and differ from browner populations with more yellow hindwings with heavier black markings from higher elevation locales are more consistent with nominate divergens. These differences in appearance and habitat preference suggest that these "forms" might be distinct species.

This species is common and widely distributed in moist forest habitats throughout much of western North America.  It is usually found at middle elevations in the Cascades and Rocky Mountains around moist meadows and in riparian zones along creeks, extending to riparian canyons in the foothills at lower elevations east of the Cascades.

Drasteria divergens is widespread and common in the interior portions of our region as far north as southern British Columbia. It is most common in dry forest and the ecotone between forest and steppe. The distribution west of the mountains is limited. Only a few records exist for west of the Cascade Crest, often in dry areas with native grasses.

This species is widely distributed in the American West as far south as southern California.

This species is a foodplant specialist feeding on elderberry (Sambucus spp.) in the Caprifoliaceae.

This species flies in late spring and summer. Pacific Northwest records are from late April through August, with most records in July. The moth is nocturnal and comes to light.