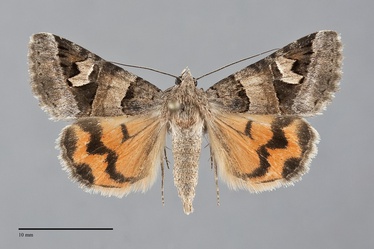 This rare species can be confused with the more common species Drasteria howlandii and Drasteria perplexa. It is most similar to the former species, but lacks a pale blue gray band next to the antemedial line present in this species. It is also slightly smaller, has a more jagged postmedial line near the reniform spot, and thinner dorsal hindwing black markings. It can be told from D. perplexa by its sharply demarcated light-colored median area that contrasts with the adjacent dark brown, uniform red-brown to dark gray without well-defined lines in D. perplexa.

Drasteria stretchii is a rare species found in dry, rocky canyons at low to middle elevations within the Snake River drainage.

This species appears to have a limited range in our area. Records are from east-central Oregon, southeastern Washington, and western Idaho.

The range extends south through western Nevada and eastern California along the east slope of the Sierra Nevada.

No information is presently available regarding larval foodplants for this species, but it may feed on buckwheats (Eriogonum spp.) in the Polygonaceae based on closely related species.

Adults are on the wing from early June through July. They are nocturnal and come to lights.