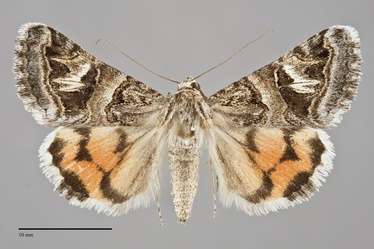 Drasteria mirifica is a rare Drasteria found in southern Idaho that resembles a pale Drasteria hastingsii. It is a moderate-sized Drasteria (FW length 17 - 19 mm). The ground color is dusty brown, with pale median area next to the evenly curved antemedial line and light blue-gray terminal area. The lines are double, but the median line is faint. Black spots medial to the subterminal line and a black spot at the apex are present in some individuals. The area distal to the reniform spot appears pale and streaky due to long, thin, spiky dentations of the postmedial line, white next to the lateral reniform spot and near the veins at the inferior spots, and thin dark scaling on the veins. The dorsal hindwing is light orange-red, with relatively thin black markings and mostly white fringe. The ventral sides of both wings are uniform white with thin black markings. The head and body are gray-brown. The antennae are ciliate in males and simple in females.

This species is most similar to Drasteria hastingsii which was considered to be a subspecies of it until recently (Lafontaine & Schmidt, 2010). Drasteria mirifica is a slightly larger and paler moth. Its ventral hindwing color is nearly pure white, whereas that of D. hastingsii has a prominent pink flush to the base of the hindwing. The black markings on the dorsal hindwing of D. mirifica are reduced compared to those of D. hastingsii, with the central portion of the postmedial line reduced to a thin line or is absent.

This species is common to abundant on dry short-grass prairies of the Great Plains and Rocky Mountain regions, extending westward to the sagebrush steppes of the southern Great Basin.  It barely enters into the southern portion of the Pacific Northwest. It flies on sand dunes at Winnemucca, Nevada.

Drasteria mirifica enters the Pacific Northwest on Idaho's Snake River Plain. It also occurs in northern Nevada (Winnemucca) but has not been collected in the adjacent portions of southern Oregon.

This species has a broad distribution in western North America, both on the Great Plains and in the Intermountain Region. It does not occur as far north as Alberta.

This species is a foodplant specialist on buckwheats (Eriogonum spp.) in the Polygonaceae.

The adults are on the wing in summer. A large series of this moth was collected in early June at Winnemucca, Nevada. Specimens from Idaho are from late June and early July.