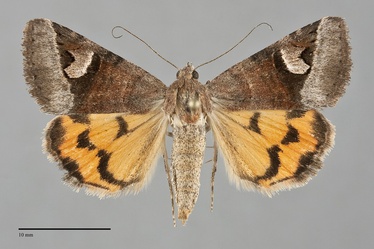 Drasteria perplexa is a distinctive Drasteria with red-brown and gray forewings and red-orange and black hindwings. It is medium-sized (FW length 15 - 18 mm). The forewing is nearly even dark red-brown medial to the straight subterminal line, occasionally dark gray medial to the locations of the antemedial line or median line, and black near the reniform spot. The terminal area is smooth blue-gray, darkest at the margin. The pale area distal to the reniform forms a large angular mark against the dark background (and black filling of the reniform spot). The hindwings are red-orange with black markings. The discal spot is usually thick, separate from the wavy postmedial line. The marginal band is bilobed as in most other Drasteria species. The head and thorax are red-brown. The antennae are ciliate in males and simple in females.

This species can usually be identified by its forewing color and pattern. It is most likely to be confused with Drasteria stretchii, a rare species from eastern Oregon that is similar in size with red-orange hindwings. Drasteria stretchii has a less red-brown forewing, with distinct darker base and lighter median area unlike those of D. perplexa.

This species is uncommon to rare on sagebrush steppe and in juniper woodlands at low to middle elevations east of the Cascades.  Range fires may be destructive to this species.

Drasteria perplexa is found in the Columbia Basin, the Snake River Plain, and the deserts of southeastern Oregon. In Washington it appears to be most common in the eastern and northern portion of the Columbia Basin and is absent from the Cascade foothills.

This species is found in western United States. The limits of its distribution are poorly known.

No information is presently available regarding larval foodplants for this species, but it may feed on buckwheats (Eriogonum spp.) in the Polygonaceae based on closely related species.

This species is on the wing from May through July. It is nocturnal and comes to light.