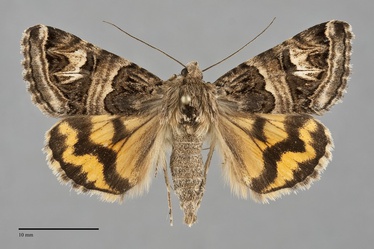 Drasteria parallela is a medium to large (FW length 17–20 mm), brown and pale orange Drasteria with a double median line that flies on high ridges in the Cascade Mountains during the summer. The forewing is dark brown with tan and gray mottling medial to the antemedial line and in the subterminal area, light tan in the medial area, and two-toned in the terminal area, pale to medium gray medially and blue-gray to brown-gray distally. The apex is darker gray to black. As in other members of the genus, the medial area distal to the reniform spot balloons toward the outer margin and is strongly toothed on the veins, contains a pale scales, and resembles a large reniform spot, whereas the true reniform spot is dark and inconspicuous. The basal, antemedial, and postmedial lines are similar, wide, black, double, with chestnut brown filling. The basal line is oblique toward the outer margin from its origin near the base, fading by mid-forewing. The antemedial line is complete, strongly laterally convex, and drawn sharply toward the base on the costa, mid-forewing, and posterior margin. Postmedial line complex near reniform to form above-mentioned false reniform spot, then nearly straight from bottom of true reniform spot to posterior margin. The median line is dark gray, double with parallel components of similar strength. Subterminal line double with dark brown to black inner and gray outer components, filled with tan, offset slightly near the costa and smooth with slight undulation elsewhere. It is preceded by a black line or series of black wedges between the veins. The terminal line is black. The orbicular and claviform spots are absent. The reniform spot is ovoid, black, less apparent than pale medial area lateral to it and instead giving the impression that it is the anterior continuation of the posterior portion of the subterminal line. Fringe dark gray brown with tan to brown base, weakly checkered in some specimens. Dorsal hindwing dull light orange with black discal spot, irregular postmedial line and marginal band. The discal spot is quadrate, separate from postmedial line, and surrounded by dark gray veins. The hindwing fringe similar orange to ground color, with variable gray basal suffusion. The head and thorax are brown. The antennae are ciliate in males and simple in females.

This species is most similar to D. divergens in size, color, and markings. The discal spot of the hindwing is rectangular in D. parallela and its posterior margin is separate from the postmedial line, and the adjacent veins are dark. In D. divergens the discal spot is longer, C-shaped, fused to the postmedial line, and the adjacent veins are the same orange color as the adjacent ground. On the forewing, the terminal area of D. divergens is thinner and more uniform in color than that of D. parallela, the fringe is solid brown, and the median line appears single. In D. parallela the terminal area is narrower than the median area and appears striped because the outer part of the subterminal line is dark, the fringe is checkered, and the median line is double with parallel components.

The Pacific Northwest populations of this moth were known as D. convergens Mustelin prior to its description as a new species in 2013. Drasteria convergens occurs in California as far north as Mono County and is similar to it except for having a red hindwing.

This species is found on dry ridgetops from 5000–6000 feet.  In the Siskiyou-Cascade Mountains of southern Oregon, it is found in dry, open shrublands and mixed conifer-hardwood forests.

Drasteria parallela has been collected at several localities along the east slope of the Cascade Mountains as far north as Chumstick Mountain, Chelan County, Washington. In Oregon it has been found in the southern Cascades, and also occurs in the nearby Siskiyou Mountains (Mt. Ashland) and in the Warner Mountains (Drake Peak).

This species has a West Coast distribution. It occurs south to the northern Sierra Nevada, California.

No information is presently available regarding larval foodplants for this species. Related species of Drasteria feed on buckwheats (Eriogonum spp., Polygonaceae).

Drasteria parallela flies during summer, with Pacific Northwest records from late June to early August. It is nocturnal and comes to lights.