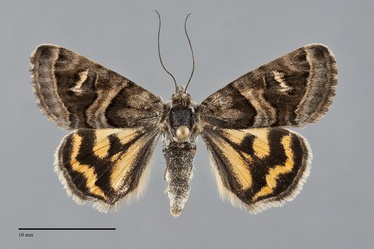 Drasteria petricola is a small Drasteria (FW length 12 - 14 mm) found in mountains and at high latitudes. The forewing is brown to gray-brown, darkest basal to the antemedial line and between the postmedial line and subterminal line and light in the median area. The outer edge of the antemedial line is smoothly outwardly convex. the brown median line is usually prominent. The subterminal line is also smooth, preceded by a dark line or series of ill-defined spots. The reniform and veins lateral to its inferior margin are pale whitish, often filling the entire are between the lateral reniform spot and the adjacent postmedial line. The hindwing is orange, occasionally very pale in northern specimens, with black markings. The cubital veins are black and are joined to the inferior discal spot. Dark shading along the medial edge of the wing is usually as dark as the postmedial line and marginal band.

This species is most likely to be confused with Drasteria adumbrata and Drasteria hudsonica, both fairly small species with orange hindwings from similar habitats. Drasteria petricola can be told from both of these species by the shape of its outer antemedial line which is smoothly convex, more angular in shape, and oriented straight across the forewing in the other species.

This species is common and widely distributed at middle to high elevations in the northern Rocky Mountain region, usually in subalpine to alpine meadows. This is also the habitat in the Olympic Mountains. It also occurs in boreal forest.

Drasteria petricola is found in the eastern part of the Pacific Northwest near the Rocky Mountains, as well as throughout northern British Columbia. An apparently disjunct population is found in Washington's Olympic Mountains. It appears to be limited to the Wallowa Mountains in Oregon.

Drasteria petricola is found in northwestern North America. Its range extends from Alaska and Yukon Territory south in the Rocky Mountains to Utah and Colorado.

This species is a foodplant specialist feeding on sweet vetch (Hedysarum spp.) in the Fabaceae.

Adults are diurnal. They are on the wing in June and July.