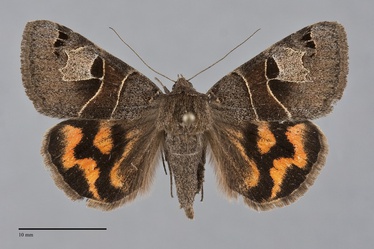 Drasteria edwardsii is a handsome and distinctive moth. It is medium-sized (FW length 18–20 mm). The forewing ground color is dusty brownish gray, with even dark brown in the median area, black in an area bordered by a bend in the postmedial line posterior to the reniform spot, and light gray in between the reniform spot and the postmedial line. The antemedial and postmedial lines are double and are most evident as the light yellow filling between the lines. The triangular reniform spot is light yellow filled with black. Three black spots are present between the veins basal to the subterminal line near the apex; the subterminal line is obsolete otherwise. The hindwing is orange to red-orange heavily marked with black fused discal spot, postmedial line, and marginal band.

This species can be identified by the unique markings on the forewing in combination with an orange and black hindwing.

This species is sporadic in open grassland habitats along the West Coast, but can be locally common.  In the Pacific Northwest, it occurs at low elevations on dry native prairies west of the Cascades, but also occurs in dry meadows at higher elevations in the mountains including both the Cascades and Rocky Mountain regions.  It has greatly declined in the Willamette Valley of western Oregon with the disappearance of the original native prairies.

Drasteria edwardsii is most widespread in Oregon in our region, ranging as far north as the Columbia Gorge and Klickitat County, Washington.

This species is found on the West Coast of North America.

Adults have been collected from mid May to early August. It is a nocturnal species and comes to light.