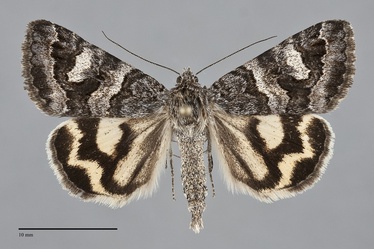 Drasteria hudsonica is a common northerly Drasteria with gray forewings and pale yellow and black hindwings. It is a small to medium-sized moth (FW length 14–17 mm). The forewings are mottled gray, whitish gray between and antemedial and median lines and between the reniform spot and adjacent postmedial line, and slightly lighter than the ground distal to the subterminal line. As in other members of the tribe Melipotini the reniform is focally laterally expanded near the reniform spot and has a mildy scalloped outer margin. The hindwing is light yellow patterned typical for the genus with black fused angular discal spot, postmedial band, and marginal band on a light yellow. The head and thorax are gray. The antennae are ciliate in males and simple in females.

Drasteria hudsonica is unlikely to be confused with any other Drasteria in its range. The common species Drasteria adumbrata flies with it and is similar in size, but its forewing is brown and its hindwing is bright orange unlike those of D. hudsonica. Drasteria nubicola, a rare species from deserts in southern Oregon and Idaho, is most similar to D. hudsonica of our Drasteria species but is unlikely to be mistaken for it because of the different habitat and range. It has a streakier forewing than D. hudsonica and lacks its red-brown median line that is present in most individuals.

Drasteria hudsonica occurs in forests in the northern part of our region as far south as northern Washington and Idaho. Washington records extend as far west as the eastern part of Whatcom County. It is found throughout British Columbia.

Drasteria hudsonica is a western species known from as far east as South Dakota and Nebraska. It is found as far north as Yukon Territory.

This species appears to be a foodplant specialist feeding on buffalo-berry (Shepherdia spp.) in the Elaeagnaceae.

Drasteria hudsonica appears to be single brooded with a flight in summer. Pacific Northwest records are from early May to early August. This species is both diurnal and nocturnal. Adults are commonly on the wing during the day.