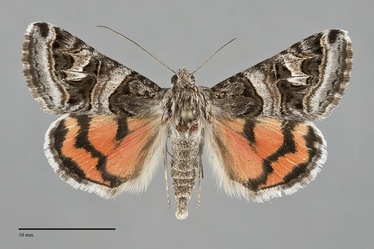 Drasteria hastingsii is a common steppe Drasteria with "busy" brown forewing pattern and red and black hindwings. It is a medium-sized species (FW length 16 - 18 mm). The forewing is brown with a full complement of double transverse lines. The median area is lighter gray to gray-brown and the terminal area is blue-gray. The subterminal line is preceded by a series of black wedges, at least near the anterior margin, and there is a black spot at the apex. The reniform spot is filled with brown. The area between the reniform and the laterally expanded postmedial line is light brown, heavily streaked with white along the lateral reniform spot and along veins M3 and CuA1 lateral to the inferior reniform spot. The postmedial line is dentate along the veins near the reniform spot, each long tooth extending to the subterminal line. The dorsal hindwing is usually orange-red with black markings, occasionally yellow. The rectangular discal spot is clearly separate from the postmedial line, which is less jagged than in most other Drasteria species. The marginal band is weakly bilobed. The ventral wings are whitish with black bands, with a pink flush near the base of the hindwing.

Drasteria hastingsii can be confused with a number of similar Drasteria species, which share its steppe habitat. It is most likely to be confused with Drasteria howlandii because this common species shares the same habitat and distribution. The ground color of the underside of D. hastingsii is pale whitish except for pink at the base of the hindwing, whereas D. howlandii is bright orange on the ventral side of both wings. Drasteria mirifica, which occurs in southern Idaho, is also closely similar but is paler on both sides. Its ventral ground color is completely white. The middle of the dorsal hindwing postmedial line (at the cubital veins) is constricted in this species and thick in D. hastingsii.  Small specimens of Drasteria divergens are similar to yellow-hindwing forms of D. hastingsii, but the posterior hindwing discal spot is fused to the postmedial line in this species, unlike the separate spot in D. hastingsii. The spring form can be confused with the tiger moth Leptarctia californiae in flight, but these species differ greatly in wing pattern.

A form with yellow hindwings has been called form perpallida Henry Edwards, but forms have no official taxonomic status under the current taxonomic rules (ICZN). These are usually rare, but are more common in some locations such as near the Okanogan and Columbia River confluence in the northern Columbia Basin of Washington.

Drasteria hastingsii is a species of dry steppe habitat, especially those with lithosol soils where its foodplant is common.  It is widespread on open sagebrush steppes at low elevations east of the Cascades, but is also common in dry, open pine forests with soils of volcanic ash and pumice at middle elevations along the east slope of the Cascades.  Range fires appear to be destructive to this species and its semi-woody larval foodplants.

Drasteria hastingsii is a common sage steppe species in the Columbia Basin. It also occurs in southeastern Oregon, but is replaced by D. mirifica in northern Nevada and southern Idaho.

The range of D. hastingsii is incompletely known because of confusion with D. mirifica. It appears most likely that it is a Pacific Northwest endemic species.

This species is a foodplant specialist feeding on buckwheats (Eriogonum spp.) in the Polygonaceae.

Adults have a bimodal seasonal distribution indicating the presence of two broods. The early brood appears in April and flies through June, while the second brood extends from mid July to mid September. This species is diurnal and nocturnal. It comes readily to lights.