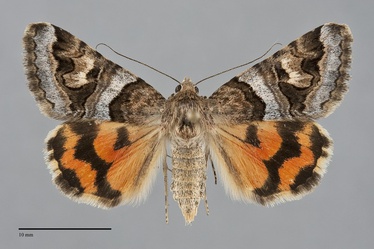 Drasteria howlandii is a common Drasteria from dry steppe habitats that has a banded brown and blue-gray forewing and bright orange and black hindwings. It is medium-sized (FW length 14 - 19 mm). The forewing ground color is gray-brown. The forewing appears transversely banded because the median area abutting the antemedial line and the terminal area are light blue-gray and the filling of the antemedial line and area between the postmedial and subterminal lines are dark brown. The median line is double. The subterminal line is preceded by a series of black wedges. The angular field between the reniform spot and laterally expanded postmedial line is light brown, with white scaling at the lateral reniform spot and along veins M3 and CuA1. The hindwing is bright orange to red-orange, usually the latter, with black markings. The discal spot is fairly large and is separate from the postmedial band. The marginal band is bilobed, typical for the genus. The ground color of the undersides of both wings is nearly uniform orange. The head and thorax are sandy brown. The antennae are ciliate in males; simple in females.

This species is most likely to be confused with Drasteria hastingsii, also a common steppe species. This species has redder dorsal hindwings. Its underside is mostly pale pink, darkest on the basal hindwing, rather than bright orange as in D. howlandii. It is also similar to Drasteria stretchii, a very rare species that is restricted to the vicinity of the Snake River in our region. Drasteria stretchii lacks the blue-gray band in the medial area that is prominent in D. howlandii, the postmedial band near the reniform is sharply dentate and outlined by black, and the hindwing discal spot is thin. The postmedial band of D. howlandii is less angulate, especially the inward bend between the lateral projections, and the hindwing discal spot tends to be thick. Drasteria howlandii could potentially be confused with the diurnal tiger moth Leptarctia californiae in flight; however, the pattern on both wings will readily distinguish these distantly related species.

This species is common and widely distributed on the short-grass prairies of the Great Plains and Rocky Mountain regions, extending westward across the sagebrush steppes of the Great Basin.  In the Pacific Northwest, it is also common on open rangelands and juniper woodlands at low elevations east of the Cascades.  Range fires appear to be destructive to this species and its semi-woody larval foodplants.

Drasteria howlandii is found in the dry interior steppes of Oregon, Washington, and Idaho. Most records are from the western part of the Columbia Basin, possibly because of relatively greater frequency of collecting in this part of Washington.

This species is distributed in the American West. Powell and Opler (2009) describe the range as intermountain, ranging east to Nebraska and south to western Texas and northern Arizona.

This species is a foodplant specialist feeding on buckwheats (Eriogonum spp.) in the Polygonaceae.

Drasteria howlandii has a bimodal flight curve, with peaks in April and August suggesting that it is bivoltine. This species is diurnal and nocturnal and can be collected by hand netting or by attraction to light. Day-flying individuals have a rapid flight, bobbing somewhat when flying slowly.