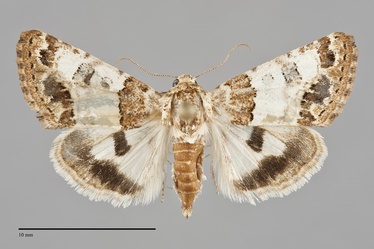 Schinia albafascia is a small moth (FW length 10 - 12 mm) that flies in eastern Oregon and southern Idaho in the summer and fall. It has a wide white median area, warm brown wing base and outer margin, and a white hindwing with black large discal spot and marginal band. The median area is pure white, sometimes light tan distal to the median line. The wing base is tan to brown, with pale striation at the basal line. The postmedial line is similar to the wing base, with metallic blue-gray near veins CuA1 and CuA2 and black spots between the veins abutting the subterminal line. The terminal area is lighter tan mixed with pale scales. The fringe is tan with moderate checkering with gray on the edge. The antemedial line is black, straight to weakly excurved with a slight notch toward the base below the costa. The median line is gray or tan, variable from faint to strong across the wing. The postmedial line is tan medially and black distally, broken into black spots on the posterior half of the wing. The anterior portion is excurved around the cell with the apex near the costa, then smoothly concave toward the base on the posterior half of the wing. The subterminal line is white to light tan, very irregular and touching the postmedial line opposite the cell and the wing margin above the fold. The terminal line is a series of black dots. The orbicular spot is small, variably outlined in thin black or lacking an outline, filled with light blue-gray. The reniform spot is large, oval or weakly figure-eight-shaped, partially outlined in black and filled with blue-gray. The claviform spot is absent. The hindwing is white with a large black reniform spot and black and brown marginal band. The hindwing fringe is white with a white or tan and gray base. The head and thorax are tan to brown. The male antenna is filiform.

This species can be recognized by the combination of a wide white median area with brown and gray on the rest of the forewing, a large gray reniform spot, and a white hindwing with black reniform spot and marginal band. The most similar species in our area is Schinia tertia, a species that occurs in southern Idaho. It has a much narrower pale area limited to the medial portion of the median area and a lighter gray discal spot on the dorsal hindwing.

This species is common to abundant and widely distributed on dry, open sagebrush steppe at low elevations east of the Cascades in the Great Basin region.

Schinia albafascia occurs in eastern Oregon from the southern slope of the Blue Mountains southward to Nevada and in southern Idaho in our region.

This species is widely distributed in the Great Basin region extending southward through Utah and Nevada to northern Arizona.

The foodplant of this species is rabbitbrush (Ericameria nauseosa) in the Asteraceae (Pogue and Harp 2004).

The flight period of this species is late summer and early fall. It has been collected during July to September in our area. The moth is nocturnal and comes to lights.