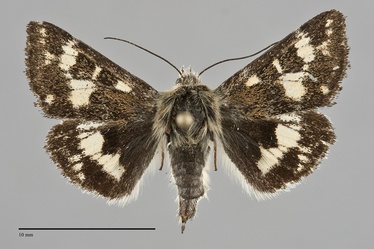 Schinia honesta is a small, day-flying moth (FW length 11 - 12 mm) that flies in mountain forests during the summer. It has a checkerboard pattern of dark gray-green and white forewings and black and white hindwings. The ground color of the forewing is cream. This color is confined to most of the median area except on the costa and trailing margin and in the cell medial to the orbicular spot. The irregular and spotty subterminal line is also this color. The remainder of the wing, including the spots, is dark olive green or green-gray. Some specimens have blue-gray instead of green on the costa and posterior wing in the median area as well as on the entire terminal area. The orbicular and reniform spots are large. The orbicular spot is round and the reniform spot is wide and kidney-shaped. The claviform spot is very large but is broadly fused to adjacent dark areas and is not evident as a discreet marking. The fringe is dark gray with weak pale checkering. The hindwing is cream to pure white, solidly black from the base to the large discal spot and along the inner margin. The black marginal band contains several ill-defined white spots near the outer margin on the mid-wing. The hindwing fringe is white with a black base. The head and thorax are dark olive-gray. The eye size is reduced. The male antenna is filiform.

This species is larger than the two species with which it could be confused, Schinia villosa and Schinia persimilis. The former species has a more brown forewing color with smooth lines and a darker hindwing with light yellowish ground color and extensive black markings. Schinia persimilis is restricted to the Rocky Mountains along the eastern border of the Pacific Northwest. Some specimens are easily separated from S. honesta because they have pink areas on the forewing, but others have green-gray dark areas on the forewing. Compared to S. honesta they have reduced pale areas on the forewing and a solid black hindwing marginal band lacking pale spots near the margin.

An unusual population resembling S. honesta is found in sandy areas in the central Columbia Basin. They are slightly lighter in color, resembling Schinia verna which occurs outside our area in the Prairie Provinces of central Canada.

The type locality of the synonym Melicleptria kasloa Smith is British Columbia, Kaslo.

This species is widely distributed in open mountain meadows at high elevations in the Cascades and Rocky Mountains, but also occurs in open areas of ponderosa pine forests, juniper woodlands, and even on sagebrush steppe at middle to low elevations east of the Cascades.  It is usually rare and sporadic, but may be locally common.

This species is limited to southern Alberta and northern California outside of the Pacific Northwest.

The foodplant of Schinia honesta is unknown, but it probably feeds on the flowers of pussytoes (Antennaria spp.) (Asteraceae).

Adults are exclusively diurnal and visit flowers during the day. They have an unusually slow flight for a noctuid. They nectar on pussytoes (Antennaria spp.) in the Coast Range of British Columbia. Adults have been collected from late May to August in our region.