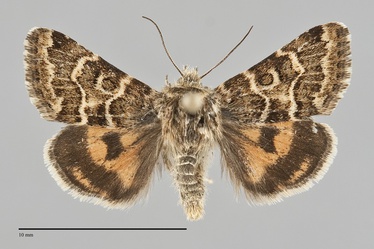 Schinia edwardsii is a distinctive, very small to small, day-flying moth (FW length 9 - 11 mm) that flies over rocky desert ridges in the late spring and summer. Its forewing is dusty warm gray-brown and cream, and its hindwing is red-orange and black. The veins are thinly covered with cream, most evident in the subterminal area. Cream is also present in the cell and fold in the median area and in the entire terminal area. The lines are dark gray, double, filled with cream. The antemedial line is slightly concave toward the base near the orbicular spot, then smoothly excurved to the trailing margin. The postmedial line is squared off lateral to the reniform spot, then undulating obliquely toward the wing base to the trailing margin. The subterminal line is cream, wide, and irregular. It is preceded by a slightly darker shade. The terminal line is a series of dark spots between the veins. The fringe is gray to dark gray-brown with weak checkering of the edge. The orbicular and reniform spots are dark gray with uniform filling of the ground color. The orbicular spot is round and the reniform spot is weakly figure-eight shaped. The claviform spot is absent. The hindwing ground color is red-orange with dark gray suffusion at the base and along the inner margin. The discal spot is black, widely quadrate with a concave outer side. The wide dark gray marginal band has sharply-demarcated medially and contains patches of the ground color near the outer margin. The fringe is white with a gray base. The head and thorax are powdery olive-gray. The eye is reduced in size. The male antenna is filiform.

This species is easily recognized by its small size, web-like pattern of cream on a dark base on the forewing, and red-orange hindwing with a large discal spot and wide marginal band.

This species appears to be very local and narrowly restricted to dry ridges with lithosol on ridges and mountains east of the Cascades. The type series of Schinia steensensis was collected at 9500' on Steens Mountain.

Schinia edwardsii is only known from a handful of sites in the Northwest. It has been found most often on ridges along the east slope of the Cascade Mountains in west-central Washington. Isolated records from eastern Idaho and southeastern Oregon (Steens Mountain) are also known.

This species occurs in Wyoming and central Montana outside the Northwest. It is seldom collected across its entire range.

No information is presently available regarding larval foodplants of this species. The most likely foodplant based on adult association is fleabane (Erigeron spp., Asteraceae).

This species is strictly diurnal and visits the flowers of yellow fleabanes (Erigeron spp., Asteraceae) during the afternoon. They fly in late spring to summer depending on elevation. Most specimens from relatively low elevations are collected during May.