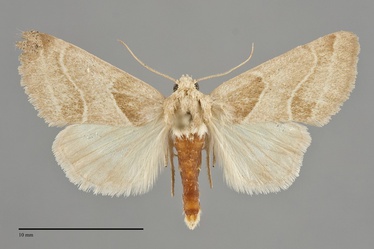 Schinia oleagina is a small, pale, yellow-tan moth (FW length 11 - 14 mm) that flies in southern Oregon during late summer. It has a simple forewing pattern of darker wing base and subterminal area and pale median and terminal areas separated by smooth cream lines, and an immaculate pale yellow hindwing. The median area, terminal area, and fringe are even light yellow-tan. The wing basal to the antemedial line is uniform darker tan, and the subterminal area is similar with the darkest areas near the anterior and posterior margins. A specimens from southwestern Oregon is slightly darker and grayer without as much contrast between light and dark. The antemedial and postmedial lines are similar, light tan, double with cream filling. The antemedial line is smooth arced toward the outer margin, nearly semicircular. The postmedial line is S-shaped, convex lateral near the end of the cell and concave toward the base on the posterior wing. The subterminal line is pale, slightly darker than the filling of the other lines, evenly excurved and nearly parallel to the outer margin. The orbicular and reniform spots are barely evident as gray smudges in dark specimens, while the reniform spot is a pale mark in lighter ones. Other lines and spots are absent. The hindwing is unmarked light yellow-brown, faintly shaded with pale gray in the darker specimen from southwestern Oregon. The head and thorax are pale yellow-tan, with the head and collar slightly lighter than the rest of the thorax. The male antenna is filiform.

This species has a similar forewing pattern as Schinia sexplagiata but is larger, has much lighter wings without dark brown contrasts, and lacks dark shading on the hindwing. Schinia oleagina can usually be identified without difficulty by its light yellowish color and simple pattern.

This species appears to be rare and sporadic on dry sagebrush steppe at low elevations in the Great Basin region. It also occurs in mixed forest with oak in southwestern Oregon.

Schinia oleagina has been collected in Oregon along the Illinois River in Josephine County and along the Malheur River in Malheur County.

This is a fairly widespread species in North America. It occurs to the south of our region in California. The range extends east through Arizona, New Mexico, and the southern parts of Utah and Colorado to the southern Great Plains. It extends further eastward to the Ohio River Valley and the Upper Midwest region in Illinois, Wisconsin, and Iowa. A number of seemingly isolated records are shown for central and southwestern Montana on the Moth Photographers Group web page.

Hardwick (1996) reports that the foodplant is Brickellia (Brickellia spp., Asteraceae).

The flight period of S. oleagina is late summer and early fall. At present (as of January, 2012) all records are from late August. This species is nocturnal and comes to lights.