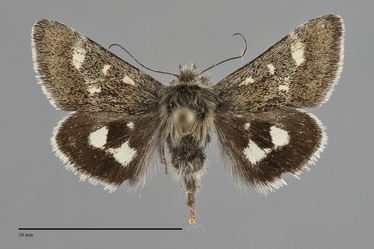 Schinia persimilis is a very small to small, day-flying moth (FW length 9 - 10 mm) that flies in the Rocky Mountains during the summer. It has gray-green, rose, and light cream-colored forewings and black hindwings with three cream spots near the discal spot. The pale areas on the forewing are reduced to spots medial, posterior, and lateral to the reniform spot and the medial cell in most specimens. The rest of the wing is uniform powdery gray-green, often with rose pink on the costa and in the antemedial and subterminal areas. The subterminal line is evident as a cream spot on the costa but is not traceable elsewhere. The large orbicular and reniform spots are the same green color and are broadly fused to the adjacent areas of the same color. The fringe is also concolorous. The hindwing appears black due to the black base, inner margin, and marginal band being fused with the large discal spot, with three slightly yellow off-white spots representing the residual ground color. The two larger ones are located lateral and posteromedial to the spot and a single small one is medial to the spot. The hindwing fringe is white with a gray base. The head and thorax are olive-green. The eye is reduced in size. The male antenna is filiform.

This species is most likely to be confused with Schinia villosa and Schinia honesta, both of which occur in the Rocky Mountains. Specimens of S. persimilis with pink on the forewing are easily distinguished from them, but pure green ones must be identified by shades of color and pattern. Schinia honesta is larger than S. persimilis with a larger patch of light color on the median forewing than and a pale subterminal line. Its hindwing marginal band contains spots of white color that S. persimilis lacks. Schinia villosa is closer in size to S. persimilis but has a dark cream and olive forewing with pale lines that extend across the width of the wing. Its hindwing ground color is darker orange-off white rather than nearly white. S. persimilis could potentially be confused with Eutricopis nexilis in our region, but the latter species has bright pink on the ventral side that S. persimilis lacks, and only two pale spots on the dorsal hindwing rather than three.

This species is found in mountain meadows of the northern Rocky Mountain region.

Schinia persimilis occurs in the mountains of southeastern British Columbia. It likely also occurs further north near the border with Yukon Territory as it has been collected on Montana Mountain south of Carcross in the Yukon. Hardwick (1996) states that he has seen this species from mountains in southern Oregon.

The range of this species extends from south-central Yukon Territory through the Rocky Mountains to Colorado and Utah.

Schinia persimilis is strictly diurnal and visits flowers. It flies in the summer, usually in late July and August. A single specimen from southern Yukon was collected in mid-June.