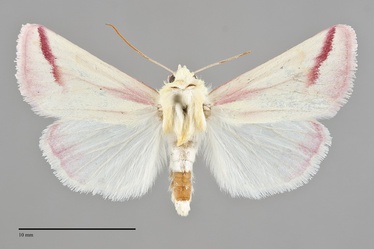 Schinia gaurae is a beautiful, small (FW length 13 - 16 mm), cream to light yellow moth that flies in the dry interior of the Northwest, mainly near the Snake and Columbia Rivers. It has an oblique bright pink band on the distal forewings that begins on the costa near the apex and variable pink suffusion at the base and outer forewing margin. The pink areas on the forewing are the cubital vein an the are immediately posterior to it, the anterior wing base, the proximal vein 1A+2A along the trailing margin, and the terminal area and fringe. The spots and transverse lines are absent (although the pink bar near the apex is most likely the shade that most noctuid moths have medial to the subterminal line). The hindwing is white with pink suffusion near the outer margin. The hindwing fringe is white with pale pink near the anterior margin.

This species is unmistakable due to its smooth pale yellow and bright pink color.

This species is widely distributed in open meadows and grasslands of eastern North America, and is particularly common on the prairies of the Great Plains.  In the Pacific Northwest, it is more sporadic on dry grasslands at low elevations east of the Cascades, but may be locally common.

Schinia gaureae has been collected in Washington, Oregon, and Idaho in the Northwest. Curiously, the distribution is along the Snake and Columbia Rivers from southern Idaho to the eastern end of the Columbia Gorge.

This species is most commonly found on the Great Plains where it occurs from southern Canada to southern Texas. The range extends east to Ohio in the Midwest and Florida in the Southeast. It reaches Arizona in the Southwest.

This species is a foodplant specialist feeding on Gaura spp. in the Onagraceae.

This species flies during the summer and has been collected in June, July, and August in our region. It is nocturnal and comes to lights, although Hardwick (1996) relates that the moth will fly in the afternoon.