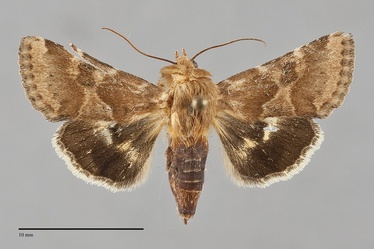 Schinia mortua is a small moth (FW length 11 - 13 mm) that flies in southern Idaho during late summer. It has a brown forewing with brown base, subterminal area, and large reniform spot and a pale orange hindwing with black base, discal spot, and marginal band. The median and terminal areas of the forewing are tan, and the wing base, subterminal area, and reniform spot are brown. Some specimens are more olive-brown than brown with the same combination of dark and light pattern. The transverse lines are pale tan, sometimes white. The basal line is only evident on the costa. The antemedial line is thick on the costa, undulating with a smoothly excurved segment toward the outer margin with apex below the cell and a notch toward the base below the costa. The postmedial line is S-shaped, convex toward the outer margin at the end of the cell and concave toward the base on the lower half of the wing. The subterminal line is wide and diffuse, slightly lighter than the terminal area and oriented nearly straight across the wing. The terminal line is a series of brown or gray spots between veins. The fringe is brown, weakly checkered. The reniform spot is large and weakly figure eight-colored. No other spots or lines are evident. The hindwing is light orange, heavily suffused with gray to black from the base to the quadrate black discal spot. The marginal band is well-defined and solid black. The hindwing fringe is white with an orange and black base. The head and thorax are even brown. The male antenna is filiform.

This species can be recognized by the brown to olive-brown forewing with similar dark base, reniform spot, and subterminal area in combination with a light orange hindwing with extensive black markings. The most similar species is Schinia jaguarina, a species that has been reported as occurring in the Northwest without confirmation by us. It lacks a reniform spot and has more orange on its hindwing, including a spot in the marginal band near the outer margin. Schinia arcigera occurs in southern Idaho and bears some resemblance to S. mortua. It has a darker brown forewing with a very smooth nearly semicircular antemedial line and a yellow and black (males) or all black (females) hindwing.

This species is most common on dry short-grass prairies of the Great Plains.  In the Pacific Northwest, it is sporadically distributed in dry grasslands at low elevations in the Great Basin region.

Schinia mortua has only been found on the Snake River Plain in southern Idaho in the Northwest. It could also occur in southwestern Oregon based on its distribution in California.

This species is most widely distributed on the Great Plains where it occurs from Montana, North Dakota, and Minnesota to Texas. The distribution extends west to California through New Mexico and Arizona. The northern limit along the West Coast is northern California.

Schinia mortua feeds on gumweeds (Grindelia spp.) in the Asteraceae.

The adults fly during the late summer. It has been collected during all of July and August in the Northwest. It is nocturnal and comes to lights.