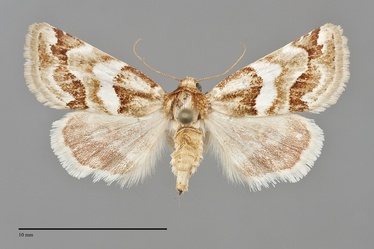 Schinia argentifascia is an uncommonly collected small moth (FW length 10 - 11 mm) that has been found in southern Oregon in the Northwest. It has a banded tan and orange-brown forewing marked with a silvery white band across the median area. The wing basal to the antemedial line and the subterminal area are slightly mottled red-brown. The median area from the antemedial line to the median line is silver white, while the lateral portion of the median area and the terminal area are dark orange-tan. The basal and antemedial lines are brown to dark brown. The antemedial line is smoothly excurved toward the lateral margin, although focally drawn toward the base above the trailing margin. The median line is evident as the transition from silver white to tan. It is undulation with a smooth lateral projection to the medial reniform spot. The postmedial line is white medially and dark brown to black laterally, even and roughly parallel to the median line but wider around the end of the cell. The subterminal line is white, undulating with notches toward the base below the costa, opposite the cell, and in the fold. A series of black dots between the veins forms the terminal line. The fringe is light grayish tan with slightly darker base.  The reniform spot is barely evident as a dark line. Other spots are absent. The hindwing is shiny tan off-white with a coarse gray to red-brown suffusion that is darkest toward the outer margin. The hindwing fringe is white with a cream base. The thorax is bright red-brown, redder than the dark areas on the forewing. The male antenna is filiform.

This species can be recognized by its banded red-brown, tan, and white forewing and bright red-brown thorax. It is most similar to Schinia walsinghami, a common and widespread fall-flying moth in Pacific Northwest steppe habitats. Its median area is entirely light orange-tan, lacking the white stripe across it that is typical of S. argentifascia.

This species has been collected in desert canyonlands at low elevations in Oregon.

Schinia argentifascia has only been collected in southern Oregon in the Northwest.

This is predominantly a species of the American Southwest. It occurs from western Texas to southern California, extending north to Utah, Nevada, and southern Oregon.

Schinia argentifascia feeds on rabbitbrush (Ericameria spp.) in the Asteraceae.

The flight period is reported as fall by Hardwick (1996), usually from late August to October.