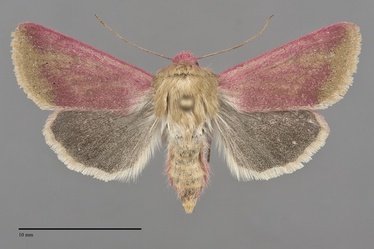 Schinia lynda is a small (FW length 12 - 13 mm) dull pink and yellow moth that flies in the deserts of south-central Oregon in late spring. The wing is even pink from the base to the position of the subterminal line and light yellowish olive in the terminal area and fringe. It lacks all lines and spots. The hindwing is medium gray, darker at the margin, with a pale yellow fringe. The head and anterior thorax are pink and the posterior thorax is olive-yellow. The male antenna is filiform.

The color and pattern on the forewing resembles that of Schinia florida but is duller. This species has a white hindwing, not dark gray as in S. lynda.

The habitat and probably foodplant of the Oregon populations of this moth resemble those of Schinia felicitata which occurs in southern California. It is possible that Schinia lynda will be considered to be a dark subspecies of S. felicitata when the genus is revised.

This species is very narrowly restricted and endemic to very dry, open sand dune habitats east of the Cascades in central Oregon.

Schinia lynda has only been found in Lake County, Oregon.

This species is a Northwest endemic.

This species probably feeds on evening primroses like the closely related Schinia felicitata and S. florida. The foodplant of S. felicitata is Oenothera deltoides (Onagraceae).

The adults have a short flight period in late May. They are nocturnal and come to lights.