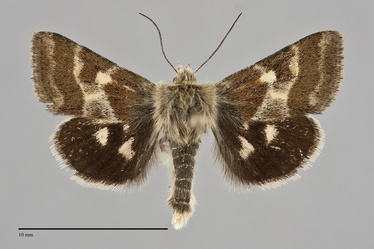 Schinia villosa is a very small, day-flying moth (FW length 8 - 10 mm) that occurs in the mountains of Washington and British Columbia during the summer. Its forewings are dark olive and dark cream in the central median area, and its hindwings are black with a few pale orange off-white patches surrounding the large discal spot. The wing base, costa in the median area, and subterminal area are dark olive with a slight brown tint. The posterior median area and terminal area are dark gray, sometimes slightly lighter olive than the other olive areas. The large oval or weakly figure-eight-shaped reniform spot is fused to the dark costa. The antemedial and postmedial lines are pale gray, smooth. The antemedial line is broadly excurved toward the outer margin with a slight notch toward the wing base in the cell. The postmedial line is weakly S-shaped, convex toward the outer margin near the end of the cell and concave toward the base on the posterior half of the wing. The subterminal line is pale gray, smoothly irregular, and nearly straight across the wing. The fringe is concolorous with the terminal area. The hindwing ground color is pale orange off-white, slightly paler than the light areas on the forewing. The base is heavily suffused with black to the large trapezoidal discal spot. The broad black marginal band is also fused to the posterior spot. The hindwing fringe is white with a dark gray to black base. The head and thorax are dark olive. The eye is reduced in size. The male antenna is filiform.

This species can be identified by its dark olive and cream forewing color and orange off-white spots on the median hindwing. The most similar species is Schinia persimilis, a day-flying moth that occurs in the Rocky Mountain region at the eastern edge of the Northwest. It is lighter powdery green-gray on the forewing, sometimes mixed with rose pink. The specimens without pink can be differentiated from S. villosa by paler color on both wings, nearly white on the hindwing, and the presence of a pale spots at the base of the cell on the forewing and medial to the discal spot on the hindwing that S. villosa lacks. Schinia honesta is a slightly larger species with a similar distribution to S. villosa. It also has lighter gray-green on the forewing and a paler hindwing than S. villosa, with pale spots in the distal hindwing marginal band that S. villosa lacks.

The type locality of the synonym Melicleptria subatra Smith is Washington, Mt. Rainier.

This species is widely distributed at middle to high elevations in open mountain meadows.  It is usually uncommon or rare, and sporadic in distribution.

The Northwest distribution of this species is in the mountains of southern British Columbia and northeastern Washington as well as in the Cascades at least as far south as Mt. Rainier.  It has also been found recently in west-central Idaho.

Schinia villosa is found in the Rocky Mountains from Alberta to northern New Mexico and northern Arizona. Its range extends east to southwestern Manitoba.

This species is a foodplant specialist feeding on fleabanes (Erigeron spp.) in the Asteraceae, including Erigeron peregrinus.

Adults are strictly diurnal and visit flowers during the day. They fly during June, July, and August, usually beginning in late June.