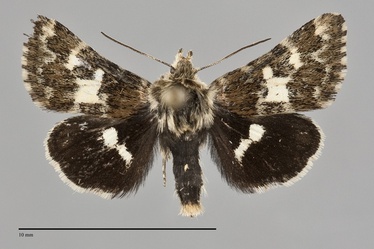 Schinia perminuta is a very small (FW length 7 - 8 mm), day-flying moth that flies in rocky desert during the spring. It has a dark green-gray and cream forewing, and a black hindwing with an off-white median band. The median area is cream-colored, usually broken into a large central spot and a smaller lateral one by the large reniform spot that is fused to the dark costa and subterminal area. The subterminal line is pale and sinuous, cream near the apex and lighter olive-gray elsewhere. The rest of the wing is dark green-gray. The antemedial and postmedial lines are pale, usually evident on the costa and trailing margin. The large reniform spot is kidney-shaped, fused to the adjacent dark costa. The orbicular spot is fused to the dark area at the base and is not identifiable. The fringe is checkered olive and cream. The hindwing is black with a cream band comprised of the ground color lateral to the fused black basal area and discal spot. The hindwing fringe is white with a black base. The head and thorax are dark olive-gray. The eye is reduced in size. The male antenna is filiform.

This species is most likely to be confused with Schinia intermontana with which it flies. S. intermontana has a larger pale spot on the forewing distal to the reniform spot, and has three pale spots on the central hindwing that are separated by a large black discal spot. Microhelia angelica has a similar hindwing. It lacks pale color medial to the reniform spot on the forewing, unlike the pattern in S. perminuta. Heliothodes diminutivus also resembles S. perminuta, although some specimens are rosy pink and can be differentiated by this feature. Specimens that are more green have a pale spot in the medial cell and a smooth subterminal line unlike S. perminuta.

This species is usually rare and sporadically distributed in dry canyonlands and grasslands at middle to low elevations east of the Cascades. It flies over lithosol.

Schinia perminuta has been found along the western and southeastern margins of the Columbia Basin in Washington. It also occurs in west-central Idaho.

The range of this species extends south through California, reaching the vicinity of San Diego.

Adults are strictly diurnal and visit flowers during the day. They favor yellow composites, including fleabanes (Erigeron spp., Asteraceae). The flight period is late spring or summer depending on elevation. This species flies in May and early June in the Columbia Basin.