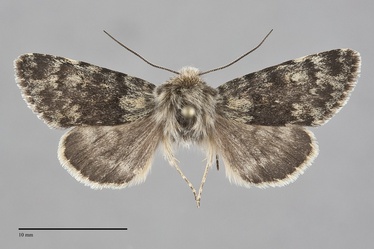 Lasionycta gelida is an extremely rarely collected species from the British Columbia Coast Range that is only known from three specimens, two males (FW length 14 mm) and one female (FW length 16). The forewing is similar to that of Lasionycta caesia in that it is dark gray with lighter bluish scales, but these are more scattered across the wing without forming distinct patches outside of the median area, and the spots are indistinct without light blue filling in the orbicular spot. Pale, whitish areas are present between the reniform spot and the postmedial line and as a contrasting pale line lateral to the dentate postmedial line. The dorsal hindwing is suffused with whitish gray or slightly yellow scales proximal to the gray marginal band. A thin discal spot is present. The postmedial line is variable, mostly absent in two of the three specimens and present but diffuse in the third (pictured above). The ventral hindwing is pale whitish gray with a thin discal spot and a dark gray marginal band. A postmedial line is evident as dark lines on the veins in two specimens and more uniformly dark in the third (shown above). The hindwing fringe is white to pale yellow. The head and thorax are medium gray. The eye is covered with fine hairs. The male antenna is biserrate.

This species flies with Lasionycta caesia and Lasionycta uniformis multicolor, both much more common species in the same alpine habitat. Lasionycta gelida is most readily identified by combination of dorsal and ventral hindwing characters. Neither of the other species has a pale proximal hindwing and a whitish ventral side without warm tint or dark veins other than at the postmedial line that is marked with a thin discal spot and dark marginal band. The ovipositor lobes of the female of L. gelida are very large compared to those of other Lasionycta species.

This rarely collected species occurs in rocky tundra at high elevations above timberline. The type specimen was collected by Craig Andrews, a mountain climber.

Lasionycta gelida has a restricted range in the Coast Range of southwestern British Columbia.

This species has not been found outside of British Columbia.

Adults are single brooded and fly in August. The holotype female was collected during the day, but the two male paratypes were attracted to light.