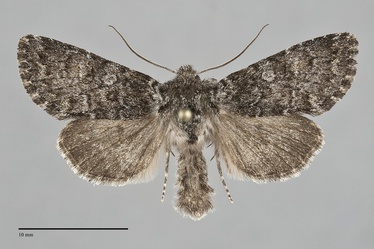 Lasionycta perplexella appears as a small version of Lasionycta perplexa (FW length of L. perplexella 14 - 16 mm) and with a narrower male antenna. It flies in subalpine forests. The forewing is slightly bluish gray with a busy pattern of lines and spots, slightly darker in the median area due to a diffuse dark gray median line. The basal, antemedial, and postmedial lines are darker gray, double, and filled with the ground color or slightly lighter gray. The antemedial line is zig-zagged on the veins. The postmedial line is dentate, sharply drawn toward the base at the costa and obliqued toward the base below the top of the cell with an offset toward the base at the level of the inferior reniform spot. The subterminal line is usually a series of pale spots that is preceded by black wedges between the veins. The orbicular spot is usually round or slightly oval and is filled with the ground color or slightly lighter gray and has a gray central ocellus. The reniform spot is filled with the ground color. The black claviform spot is usually small. The hindwing is medium-dark to dark brownish gray, gradually darker gray toward the margin, with darker gray discal spot and postmedial line and two-toned gray fringe. The head and thorax are powdery gray with weak light and dark gray lines on the edges of the collar and tegulae. The male antenna is biserrate with triangular individual segments.

Lasionycta perplexella is closely similar to L. perplexa in appearance, differing mainly in the narrower structure of the male antennae. That of L. perplexa is bipectinate with long extensions from each side of each segment. This difference is most evident under magnification and is difficult to appreciate with the unaided eye. In general, L. perplexella is the smaller of the species and has a rounder and less pale orbicular spot. It is also more restricted to subalpine habitats, but both species commonly fly together near timberline. Females are best associated with the males. These species can be distinguished by the sequence of their mitochondrial DNA, an advanced technique that is available only at a few universities. Lasionycta sasquatch, found in subalpine forest in the Cascade Range and other mountains in western Oregon, is similar in size and general color to L. perplexella, but is darker charcoal gray and has a two-toned hindwing with a black marginal band on a lighter tan ground.

The closely similar species Lasionycta subalpina might occur in the mountains of southern Idaho. It differs subtly from L. perplexella in the relative darkness of the ventral forewing and hindwing (equally dark in L. subalpina; hindwing lighter than the forewing in L. perplexella). Any specimen resembling L. perplexella from this area should be submitted for DNA sequencing to confirm its identity.

This species is narrowly endemic to high elevation spruce-fir forests in the northern Rocky Mountains and northern Cascades.  It appears to be rather uncommon.

The range of this species includes the Rocky Mountains of western Alberta as well as the mountains of southern Yukon Territory.

The adults are on the wing during the summer, usually from late June to early August. They are nocturnal and come to lights.