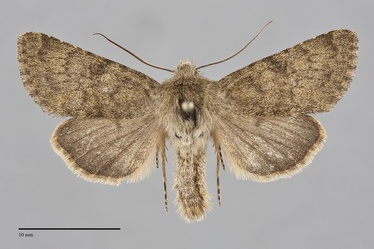 Lasionycta promulsa is a medium-sized, gray-brown noctuid (FW length 13 - 17 mm) with markings limited to a simple pattern of dark lines and spots. The forewing ground color of our populations are nearly uniform, powdery gray-brown, slightly darker in the median area due to a diffuse gray median line and medial to the subterminal line due to a darker shade. The antemedial line, postmedial line, and spots are similar darker gray. The lines are single. The antemedial line is faint and even, white the postmedial line is dentate with an S-shape typical for the genus. The orbicular spot is round or ovoid, filled with the ground color or slightly lighter gray scales and usually lacking an ocellus. The reniform spot is very faint. The claviform spot is absent. The dorsal hindwing is gray-brown with darker gray shading toward the outer margin, faint discal spot, and postmedial line. The fringe is two-toned, gray at the base and pale brownish white distally. The ventral hindwing is pale gray-brown with a small discal spot and faint marginal band limited to near the outer margin. The head and thorax are gray-brown. The eye is covered with fine hairs. The male antenna is biserrate.

This species is most likely to be confused with Lasionycta silacea over most of its range in British Columbia. Compared with L. promulsa, this species is yellower, including on the ventral hindwing, and is more likely to have a central spot in the orbicular spot. In the eastern part of the range L. promulsa is similar to Lasionycta brunnea, a brown member of the Lasionycta phoca species-group. These species are similar on the upper side and are most easily distinguished by the color and pattern of the ventral hindwing. Those of L. brunnea are paler brownish off-white with a triangular or chevron-shaped discal spot and distinct postmedial line that L. promulsa lacks. In southeastern Alberta L. promulsa flies with Lasionycta pulverea, another gray-brown moth. It has longer and thinner hindwing discal spots on both sides of the hindwing than L. promulsa and is smaller with a wider bipectinate male antenna.

The populations of L. promulsa demonstrate geographic variation. Those from Colorado and northern Utah are more orange-brown than those from the north and those from the Wasatch Plateau in central Utah are paler gray-brown.

This species is widely distributed throughout the Rocky Mountains at high elevations in rocky alpine tundra at or above timberline.  It may be locally common in this restricted habitat.

Lasionycta promulsa is limited to British Columbia in the Pacific Northwest where it has been collected in the southern third of the province and on Pink Mountain in the northeast. It is likely to be more widespread than these records suggest because it occurs in southern Yukon Territory and in western Alberta.

This species is found near the British Columbia border in southwestern Yukon Territory and in western Alberta. It also occurs in the central and southern Rocky Mountains in Utah, Colorado, and southern New Mexico.

Lasionycta promulsa is single-brooded and flies during the summer together with our other Lasionycta species. The collection records are from July and August. It is nocturnal and comes to lights.