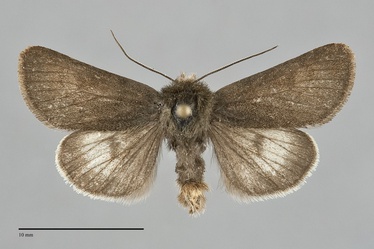 Lasionycta lagganata is a rarely collected, small (FW length 12 - 14 mm), day-flying moth that occurs in the Rocky Mountains of Canada. It has nearly unmarked, slate-gray forewings and black and white hindwings. The forewings have rounded apices and appear stubby. They are nearly uniform slate gray with barely perceptible dark lines and reniform spot. The antemedial line is broad and nearly straight across the wing. The postmedial line is weakly scalloped. The hindwings are nearly white with a large gray discal spot, a sharply defined dark gray band on the outer margin, dark veins in some specimens, and a white fringe. The head and thorax are covered with hair-like slate gray scales. The male antenna is weakly biserrate.

The habitat is alpine fine shale scree slopes with sparse vegetation above timberline.  It is a rarely collected species.

This species has only been collected at one site in the Purcell Mountains of southeastern British Columbia.

Lasionycta lagganata is found in the Rocky Mountains of Alberta outside of the Pacific Northwest.

This species is diurnal and visits flowers during the day. A single specimen was collected by Jim Troubridge and Lars Crabo in a light trap placed on its shale scree habitat.