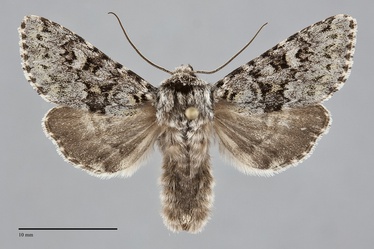 Lasionycta haida is a rarely collected, medium-sized gray moth (FW length 16 - 17 mm) that resembles Lasionycta mutilata and is found near timberline on Haida Gwai (Queen Charlotte Islands), British Columbia. This species has normal and melanic forms. In the normal form, the forewing is medium-dark blue-gray, darker gray in the median area. The lines and spots are black. The antemedial and postmedial lines have strong black components abutting the median area, and are filled with light gray. The antemedial line is undulating, occasionally zig-zagged on the veins near the trailing margin. The postmedial line is strongly dentate. The dark gray median line is most evident in the cell and on the costa. The pale gray subterminal line is slightly irregular and is preceded by a series of black triangles between the veins, including at the costa where they form an ill-defined black spot. The fringe is checkered light and dark gray. The orbicular and reniform spots are filled with uniform light gray. Both are slightly smaller than in most specimens of L. mutilata. The posterolateral reniform spot touches the postmedial line. The claviform spot is small. A small patch of light gray or slightly greenish scales are present between the tip of the claviform spot and the postmedial line in the cell. In the melanic form most of the wing is dark brown-gray, including the central spots, accentuating the pale gray filling of the lines and spots. The hindwing is medium-dark brown-gray, suffused with darker gray except near the gray discal spot and postmedial line, with a weakly checkered fringe. The head and thorax are hoary dark gray with black posterior to the collar. The surface of the eye is covered with fine hairs. The male antenna is biserrate. The female is unknown.

The non-melanic form of this species resembles closely L. mutilata but has smaller forewing spots and a slightly more pointed forewing shape. The ventral thorax is dark gray in L. haida and lighter medium gray in L. mutilata. Psammopolia arietis occurs on ocean beaches on Haida Gwai and is similar in color and pattern to L. haida. It has a thin basal dash, dark gray filling of the central orbicular and reniform spots, and a serrate subterminal line unlike L. haida.

This species is endemic to high elevations above timberline on rocky alpine tundra in the Queen Charlotte Islands of British Columbia.  It is locally common to abundant in this restricted habitat.

This species has only been found on Graham Island, Queen Charlotte Islands, British Columbia.

This species is not known to occur outside of British Columbia.

This species has only been collected twice, once in late July and the other time in mid-August. The males are nocturnal and come to lights. The females are unknown and might fly during the day or not at all. The 1987 collecting trip during which most of the type series of this species was collected is recounted by Nancy duPre´ Clarke (1991).