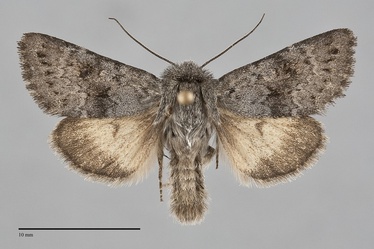 Lasionycta impingens is a small, diurnal and nocturnal noctuid moth (FW length 12 - 14 mm) that flies near timberline in the mountains of British Columbia in our region. It has blue-gray forewings with a dark median area and light yellow-brown hindwings with a dark marginal band. The forewings are medium-dark blue-gray with a darker median area due to a diffuse gray median line. The antemedial and postmedial lines are dark gray near the median area and slightly lighter blue-gray opposite to the median area. The antemedial line is irregular, while the postmedial line is scalloped and smoothly convex toward the outer margin around the reniform spot and nearly straight below the spot to meet the trailing margin at nearly a right angle. The postmedial line is preceded by a row of black wedges that are coalesced into a dark gray spot on the costa. The fringe is blue-gray with very weak checkering. The three spots are dark gray. The orbicular spot is oval and is filled with the ground color or slightly whitish gray scales without an ocellus. The reniform spot is mostly obscured by the medial line. The claviform spot is small or absent. The hindwing is light yellow-brown with a sooty marginal band on the distal third and a thin chevron-shaped discal spot. The hindwing fringe is similar yellow-brown as the ground color. The head and thorax are uniform blue-gray. The eye is covered with fine hairs. The male antenna is weakly biserrate.

Lasionycta impingens is most likely to be confused with Lasionycta leucocycla with which it flies near timberline in northern British Columbia. This species is less blue-gray than L. impingens and has a busier pattern of double lines and has an ocellus in the orbicular spot. On the ventral hindwing L. impingens is nearly entirely yellow-brown whereas L. leucocycla has a dark marginal band.

Populations of L. impingens are arranged in two subspecies. Our populations are the nominate subspecies. Subspecies L. i. curta (Morrison) is found in the Rocky Mountains from southern Montana to Colorado. It is slightly larger, has an orange wash to the forewing color and often has patches of yellow or orange scales in the median area, and its hindwing is darker orange brown with a less contrasting marginal band than in L. i. impingens.

This species is common and widely distributed at high elevations throughout the Rocky Mountains in spruce-fir forests near timberline, and is particularly abundant in alpine tundra above timberline.

Lasionycta impingens is found in the mountains of eastern and central British Columbia. It has been found as far south and west as Pavilion Mountain near Clinton (J. Troubridge, personal communication).

The range of this species extends north to central Yukon Territory from the Pacific Northwest. It also occurs in the Rocky Mountains in western Alberta, southern Montana, Wyoming, and Colorado. A seemingly isolated population is found at Churchill, Manitoba.

This species is on the wing during the summer and have been collected during July and August. The moth is diurnal and visits flowers during the day, but is also commonly collected at light. They take nectar at moss campion (Silene acaulis), penstemon (Penstemon spp.), and bluebells (Mertensia spp.).