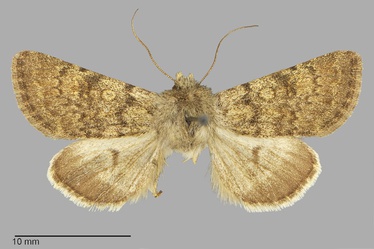 Lasionycta macleani is a small (FW length 13 mm), yellow-brown noctuid that is only known from a single specimen from the mountains of southwestern British Columbia. Its forewing has a simple pattern of dark lines and spots, and its pale hindwings have large discal spots on both sides. The forewing is powdery, light yellow-brown with a suffusion of dark scales, slightly darker distal to the postmedial line. The antemedial and median lines are diffuse dark gray. The postmedial line is dark and scalloped. The pale yellow-brown subterminal line is nearly even, preceded by slightly darker gray-brown. The terminal line is diffuse dark gray-brown between the veins. The base of the fringe is weakly checkered with yellow-brown and darker gray-brown. The orbicular and reniform spots are gray-brown. The orbicular spot is oval and filled with light yellow-brown. The reniform spot is filled with gray-brown similar to the adjacent median line and is obscure. The claviform spot is absent. The hindwing is light yellow-brown with medium-dark brown-gray chevron-shaped discal spot and a well-defined marginal band on the distal third. The fringe is two-toned with weakly checkered yellow-brown and brown-gray base and whitish outer components. The ventral side of both wings are light yellow-brown with dark discal spots and faintly darker margins. The head and thorax are yellow gray. The eye is covered with fine hairs. The male is unknown.

This species is most likely to be confused with the other brownish Lasionycta species in our area: Lasionycta promulsa, Lasionycta silacea, and Lasionycta pulverea. It can be told from all of them by the large discal spots on both sides of the hindwing. It is most similar to L. pulverea, at present only known from southwestern Alberta near the British Columbia border, but differs from it in the size of the bursa copulatrix, as described and illustrated in Crabo and Lafontaine (2009).

The exact location in which the only known specimen of this species was collected is unknown. It was probably found in a subalpine meadow or over alpine tundra because it was collected with a series of Lasionycta luteola, which is an alpine species.

Lasionycta macleani is only known from Mt. McLean near Lillooet, British Columbia. It was most likely collected on the east side of this mountain and has not been found on the more accessible west side.

This species is restricted to British Columbia.

No information is presently available regarding larval foodplants of this species, but it probably feeds on herbaceous vegetation based on the habitat.

The type specimen was collected during the day on July 11.