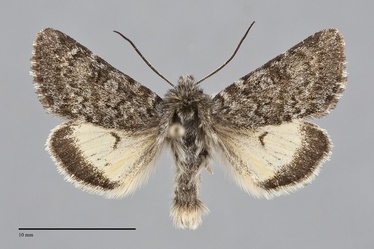 Lasionycta leucocycla is a small, day-flying moth (FW length 11 - 14 mm) that flies in the mountains of British Columbia in our region. It has gray to brown-gray forewings and banded, light yellow hindwings. The forewing is slightly mottled but otherwise nearly uniformly colored. The basal, antemedial, and postmedial lines are dark gray, double, and filled with a slightly lighter shade of the ground color. The antemedial line is moderately irregular. The postmedial line is serrate. A dark median line is usually evident. The subterminal line is indistinct, but its position is indicated by a row of dark chevrons between the veins medial to it. The orbicular spot is round and dark gray, filled with lighter gray and usually with a central dark ocellus. The reniform spot is dark, indistinct and filled with the ground color. The claviform spot is small. The hindwing is pale yellow marked with a chevron-shaped dark gray discal spot and sharply defined marginal band. The postmedial line is reduced to a series of spots on the veins. The hindwing fringe is white. The head and thorax are covered with a mixture of gray and white hair-like scales. The male antenna is biserrate.

The North American populations of L. leucocycla are arranged in four subspecies. The Pacific Northwest populations are L. l. albertensis (McDunnough) which are characterized by the yellow dorsal hindwing with a relatively thin discal spot and narrow marginal band.

This species is widely distributed on dry, arctic tundra across both Eurasia and North America, extending southward on alpine tundra above timberline in the northern Rocky Mountain region.

This species has a Holarctic distribution. The Palaearctic populations occur from Fennoscandia to Far Eastern Russia. In North America it occurs across the high arctic from northern Alaska to Greenland. The southernmost limits of its range are the Beartooth Plateau in northern Wyoming in the Rocky Mountains, James Bay of Hudson Bay in Ontario, and Labrador. A relict population is also found on Mt. Washington in the White Mountains of New Hampshire.

This species feeds on herbaceous tundra vegetation such as Dryas spp. in the Rosaceae, Saxifraga spp. in the Saxifragaceae, and dwarf arctic willows (Salix spp.) in the Salicaceae.

This species is diurnal and visits flowers during the day. It is fond of the flowers of moss campion (Silene acaulis). The flight season is summer, with most records from our region from late June and July.