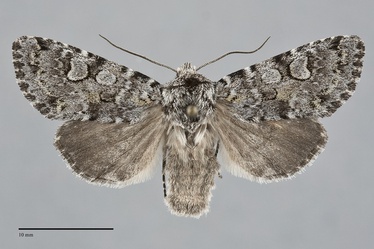 Lasionycta mutilata is a common, medium-sized (FW length 16 - 18 mm), noctuid moth that flies in high-elevation conifer forests. It has silver-gray forewings with subtle green to yellow scales in the fold and a pattern of black and pale gray lines and spots. The forewing is slightly mottled silver-gray to medium blue-gray, slightly darker gray in the median area. Light, greenish scales in the fold are most evident in fresh specimens. The lines are double and filled with slightly lighter gray than the ground color. The components of the lines near the median area are darkest. The antemedial line is slightly irregular. The postmedial line is dentate, often with dark and light spots on the veins at the tips of the teeth in the subterminal area. A diffuse black median line is usually evident. The pale gray subterminal line is sinuous. It is preceded by black at the costa and between veins opposite the cell and in the fold and followed by dark gray opposite the cell and in the fold. The fringe is checkered with light and dark gray. The orbicular and reniform spots are black, large, and filled with uniform light blue-gray scales. The orbicular spot is oval and the reniform spot is heart-shaped. The posterolateral reniform spot touches the postmedial line. The claviform spot is small. The hindwing is medium dark gray, darker gray toward the outer margin, with faint diffuse discal spot and postmedial line. The head and thorax are hoary silver gray. A black triangle is present on the dorsal thorax posterior to the collar. The male antenna is weakly biserrate.

This species is most similar to Lasionycta haida, which appears to replace it on Haida Gwai (Queen Charlotte Islands). The ventral thorax of L. mutilata is medium gray, while that of L. haida is dark gray. In practice these species are easily separated by locality. Lasionycta mutilata is similar to Lasionycta taigata, a rarely collected species that occurs in bogs in northeastern British Columbia, although these species are not known to be sympatric. It has a more mottled dark and light gray pattern and its reniform spot is separate from the postmedial line unlike that of L. mutilata. Hada sutrina, a common moth from high-elevation forests throughout our region, is similar in having a mottled gray forewing pattern. It differs from L. mutilata in having a black median dash posterior to the claviform spot.

This species is found in subalpine spruce-fir forests.  It is moderately common in this restricted habitat.

Lasionycta mutilata is widespread in montane forests in our region. It occurs near the Pacific Coast from northwestern British Columbia to southern Oregon. The range extends east across southern British Columbia and Washington as far as the Alberta border and the Blue Mountains. It has not been collected in Idaho or in eastern Oregon.

This species is found near British Columbia at Ketchikan, Alaska, and throughout the Rocky Mountains of Alberta. Seemingly isolated records from western Wyoming include the Wind River Mountains and Yellowstone National Park.

This species is single-brooded and the adults fly during the summer. The records from our region are from July and August. It is nocturnal and comes to lights.