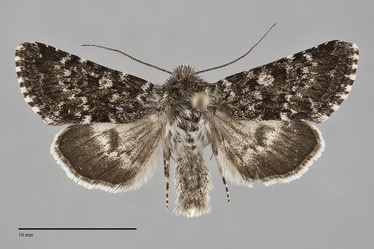 Lasionycta poca is a small species (FW length 12 - 14 mm) that flies near timberline. It has charcoal-gray forewings marked with white-filled lines and spots and a putty-white hindwing with a black discal spot and marginal line. The forewing is dark gray and nearly black, with black lines and spots. The basal, antemedial, and postmedial lines are double with pale gray to white filling. The inner component of the postmedial line is strongly serrate, and the teeth are often marked with pale, gray spots on the veins lateral to the rest of the line. The serrations cross the pale filling of the line and divide it into a series of white dots. The subterminal line is pale and indistinct, but its position is evident due to darker gray suffusion or spots between the veins medial to it. The fringe is strongly checkered with black and white. The orbicular spot is round and filled with light gray to white and a dark central ocellus. The reniform spot is filled with the ground color and is inconspicuous. The claviform spot is also inconspicous against the dark ground. The dorsal hindwing is putty-white with a large black discal spot, a scalloped postmedial line, and a broad, well-defined marginal band. The fringe is two-toned, gray basally and white distally. The ventral hindwing is putty-white with a thick black postmedial line, a large discal spot, and a gray marginal band. The head and thorax are covered with black and white hair-like scales. The male antenna is weakly bipectinate.

This species resembles several other Lasionycta species in our region. It is most similar in pattern on the dorsal and ventral sides to Lasionycta illima, a rarely collected species found in northern British Columbia, and Lasionycta sasquatch, a species that is found in high elevation forests in the Cascade Range south of the Snoqualmie Pass area of Washington. Both of these species have similar undersides with a prominent postmedial line. Lasionycta illima is lighter colored with a blue-gray forewing and yellowish hindwing with reduced black markings compared to L. poca. Lasionycta sasquatch is larger and duskier, with a light tan hindwing color. Lasionycta leucocycla also has light yellow hindwings that lack the ventral postmedial line. The male antennas of these species differs in the width of the pectinations. Those of L. poca are bipectinate with T-shaped individual segments whereas those of L. leucocycla are biserrate with triangular segments. Lasionycta leucocycla has reduced eyes and is strictly diurnal while the eyes of L. poca are normal in size and the moth is more common at night.

Lasionycta coloradensis, another closely related species that has a brownish dorsal hindwing, flies in the Rocky Mountains of Colorado and Wyoming. It should be sought at high elevations in the mountains of southeastern Idaho.

This species is widely distributed at high elevations in the northern Rocky Mountains and north Cascades within subalpine meadows and on alpine tundra around timberline.  It may be locally common in this restricted habitat.

Lasionycta poca occurs widely in the southern half of British Columbia. It is most commonly collected in the Coast and Cascade Ranges, but it also occurs in the Rocky Mountains near the border with Alberta. It is restricted to the northern Cascade Mountains in Washington.

This species occurs in the Rocky Mountains of Alberta outside of the Pacific Northwest. There is a single record from southwestern Yukon Territory.

Adults are single-brooded and fly during the summer, usually in July and August with the exact timing dependent on snow melt. It flies during the late afternoon and visits the flowers of moss campion (Silene acaulis), but is much more active at night when it is attracted to lights.