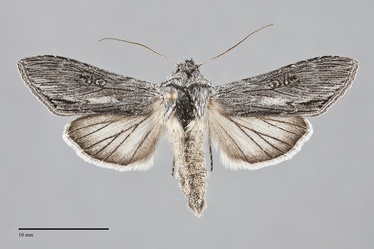 Cucullia antipoda is a medium-sized moth (FW 15 - 18 mm) with a finely streaked gray pointed forewing with dark orbicular and reniform spots placed near each other and a black anal dash that flies on steppe throughout the Northwest during late spring and early summer. As in other members of the genus the forewing is long and thin with a convex distal costal margin and a pointed apex, and the patagiae can be raised into a pointed "hood" that is most apparent when the moth is resting and is variably present in preserved specimens. The ground color in the Northwest is medium-dark gray, often lighter in the fold on the mid and distal wing. The veins are black, and thin dark gray lines are present in each interspace on the distal wing to produce a finely longitudinally streaked pattern. The cell between the spots is dark gray in some specimens. A short black dash is located near the anal wing, and a very thin basal dash is evident in a few individuals. The antemedial and postmedial lines are gray, faint. The antemedial line is usually an ill-defined oblique mark on the costa, and very strongly zigzagged between the veins across the rest of the wing when visible. The postmedial line is usually absent, sometimes a dark mark on the costa or faintly visible as a strongly serrate mark near the trailing margin or a pale oblique mark across the mid-wing. The terminal line is a series of dark spots between the veins on the anterior wing and a solid black line on the posterior half. The fringe is of the ground color, with fine barring parallel to the outer margin. The orbicular and reniform spots are black, double with components similar or with the outer line thicker black, with filling between the lines and centrally of the ground color. The spots are located close to each other, occasionally touching. The orbicular spot is round to slightly oval and the reniform spot is large, exceeding the width of the cell, broadly kidney-shaped. The other lines and the claviform spot are absent. The hindwing is light to medium-dark brownish gray, darker toward the margin and darker in females, with dark gray veins and terminal line. The fringe is white with a brown-gray base anteriorly and all white near the anal angle. The head and base of the collar is striped medium-dark gray. The distal collar and the remainder of the thorax is lighter gray, also with darker barring. The posterior thorax bears a short tuft of dark gray scales. The male antenna is filiform.

Cucullia antipoda is geographically variable. Populations from eastern California are significantly lighter on both wings than those from our area.

This species is widely distributed on dry prairies, rangelands, and deserts throughout most of western North America.  In the Pacific Northwest, it is common to abundant in juniper and pine woodlands, on sagebrush steppe, and on bunchgrass prairies at middle to low elevations east of the Cascades.

Cucullia antipoda is widely distributed in the dry interior regions of the Pacific Northwest as far north as southern British Columbia. It has not been found west of the Cascade Range.

This species is widely distributed in the western United States and adjacent southern Canada from west-central Saskatchewan and western North Dakota south to eastern New Mexico. The range in California is predominantly in the eastern part of the state except in the south where it occurs to the Pacific.

No information is presently available regarding larval foodplants of this species, but it probably feeds on shrubby Asteraceae such as rabbitbrush (Chrysothamnus spp.).

This species flies during the spring and summer. Records from our region begin as early as April and extend to early August, peaking in June. It is nocturnal and comes readily to lights.