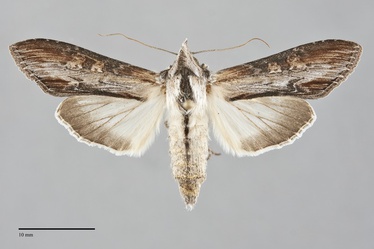 Cucullia montanae is a large moth (FW length 21 - 23 mm) that flies near the coast and in central interior locations during the summer. It has a streaky blue-gray forewing with a red-brown and dark brown costa and well-defined spots, and a pale hindwing. As in other members of the genus, the forewing is long and thin with a convex distal costal margin and a pointed apex, and the patagiae can be raised into a pointed "hood" that is most apparent when the moth is resting and is variably present in preserved specimens. The forewing ground color is light blue-gray, the costa and trailing margin or dark purplish brown and black, and the rest of the anterior wing is dark red-brown. A series of red-brown streaks are present across the terminal area, focally strongest as a pair of dashes above the anal angle. An S-shaped black mark is formed by the posterior postmedial line anterior to these dashes. The antemedial line is faint, gray, double with pale gray filling, strongly sinuous, most evident as the pale filling against the dark anterior wing. The postmedial line is a pale spot on the costa and the S-mark near the trailing margin described above. The terminal line is a series of black marks between the veins on the anterior wing and a solid black line on the posterior wing. The fringe is gray with faint dark gray barring parallel to the margin. The orbicular and reniform spots are similar, dark gray with incomplete spotted outlines, pale reddish gray filling and dark gray and red-brown internal spots. The orbicular spot is irregularly quadrate. The reniform spot is wide, broadly kidney-or weakly hourglass-shaped. The other lines and the claviform spot are absent. The the hindwing is pale whitish gray with a dark gray marginal band with a moderately well-defined medial border on the outer third. The hindwing fringe is white with a light yellow base and gray median line. The head is gray with light gray barring on the top. The patatgium has a dark brown base, fading to tan and light blue-gray at the tip. The tegula is gray and tan anteriorly, fading to pale whitish gray posteriorly, dusted with black scales. The central thorax is dark gray and brown. The male antenna is filiform.

This species can be identified from other Cucullia species by the combination of a multicolored light blue-gray, red-brown, and dark brown forewing with distinct spots and a white and gray hindwing. The most similar species, Cucullia similaris, has spotted outlines to the orbicular and reniform spots like Cucullia montanae, but lacks the brown colors on the anterior and distal wing.

This species is widely distributed on dry prairies and deserts at low elevations throughout much of western North America, and appears to be most common in the deserts of the Southwest. It is usually rare and sporadic in the Pacific Northwest, occurring in open mountain meadows at middle elevations and on ocean beaches. The larvae can be found on gumweed (Grindelia spp., Asteraceae) on some beaches in northwestern Washington, even though the adult moth is rarely collected in this area.

Cucullia montanae occurs in two separate areas in the Northwest. A west-side population is most closely associated with beaches in the Puget Sound and Gulf of Georgia as well as Vancouver Island. Inland populations are found in eastern Oregon and southern Idaho.

Cucullia montanae is fairly widespread in western and central United States and adjacent southern Canada. It is most closely associated with the Great Plains and the southern Rocky Mountain region. The northern limit of its distribution is southwestern Manitoba to southwestern Alberta. Near the border with Mexico it is found from western Texas to southeastern California.

This species is known to feed on gum weed (Grindelia spp.) and rabbitbrush (Chrysothamnus spp.). Partially grown larvae are sometimes common on gum weed during September.

The adults fly during late summer, usually during July and August. They come to lights, although it appears that they are relatively poorly sampled using this method.