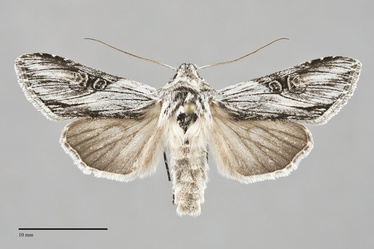 Cucullia mcdunnoughi is a relatively small Cucullia (FW length 16 - 18 mm) that flies in steppe and dry forest east of the Cascade and Coast Ranges. It has a streaky, silver-gray forewing patterned with dark on the distal costa, between the spots, and an anal dash. The forewing is relatively short and less pointed for the genus. As in other Cucullia, the patagiae can be raised into a pointed "hood" that is most apparent when the moth is resting and is variably present in preserved specimens. The forewing ground color silvery light gray. The veins are black, and gray lines are present between the veins on the distal wing. The color is much darker gray areas on the costa distal to the antemedial line, in a triangular area on the distal wing below the apex, and on the entire trailing margin. The cell is dark gray to black between the spots. A black dash bordered anteriorly by light gray is located in the fold on the outer third of the wing. The dark gray antemedial line forms an oblique mark from the costa to the orbicular spot and is faintly visible as zigzag mark near the trailing margin. The postmedial line is nearly completely absent, usually reduced to a small dark mark on the costa and sometimes also barely visible near the trailing margin. The terminal line is a series of gray spots between the veins on most of the wing and a black line near the anal angle. The fringe is the same gray as the ground color with faint longitudinal barring. The orbicular and reniform spots are positioned near each other, occasionally touching, and have double dark gray outlines filled with lighter gray, and are filled internally with dark gray. The orbicular spot is round and the reniform spot is large, broadly kidney-shaped. The other lines and the claviform spot are absent. The hindwing is medium brownish gray, darker toward the outer margin, with a faint gray discal spot, veins, and terminal line. The hindwing fringe is two-toned gray basally and white distally, paler near the anal angle. The head and base of the collar are medium gray striped with dark gray. The edge of the collar and the rest of the thorax are pale whitish gray with darker barring. A short tuft of dark gray scales are present on the posterior thorax. The male antenna is filiform.

This species can be identified from other Cucullia species by its small size and with mottled pale and dark gray forewing with distinct spots and absent postmedial line in combination with gray hindwing. It is most similar to Cucullia basipuncta, a rarely collected species that has only been found in extreme southeastern Oregon in the Northwest. Males of this species are readily told from C. mcdunnoughi by their white hindwings, but females of C. basipuncta are best distinguished by the presence of a postmedial line.

This species is widely distributed in dry, open desert habitats of western North America.  In the Pacific Northwest, it is usually rare and sporadic in dry grasslands at low elevations east of the Cascades, but may be locally common.

Cucullia mcdunnoughi is found in the dry southern interior of British Columbia as far north as the vicinity of Lillooet. It is more widespread in the dry interior steppes of Washington, southeastern Oregon, and southern Idaho.

This species is found in California and the western Great Basin to the south of the Pacific Northwest. It has been recorded from Nevada and Arizona east of California.

This species is a foodplant specialist feeding on desert herbaceous Asteraceae such as Stephanomeria species.

The flight period of C. mcdunnoughi is late spring and summer. Records from the Pacific Northwest span mid-May to early August but are most common in June. This species is nocturnal and comes to lights.