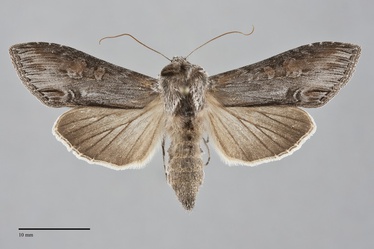 Cucullia postera is a large moth (FW length 20 - 22 mm) that flies in boreal and montane forests during the summer. It has a streaky, pointed, dark blue-gray forewing with a dark gray and brown costa, faint spots, and dark marks near the anal angle. The forewing has a typical Cucullia shape, long and thin with a convex distal costal margin and a pointed apex, and the patagiae can be raised into a pointed "hood" that is most apparent when the moth is resting and is variably present in preserved specimens. The color is streaky dark blue-gray to violet-gray, with dark veins and pale and dark streaks between the veins on the distal wing. The costal portion of the wing is dark black-gray anteriorly and warm purplish brown posteriorly. The trailing margin is gray to black, redder brown at the anal angle where there are one or two black dashes, longest below vein CuA2. A C-shaped dark gray or black line and adjacent spot near the dashes represents the posterior remnant of the postmedial line. Portions of the serpentine faint gray and lighter gray antemedial line are barely visible in some specimens. The terminal line is a series of black spots between the veins on the anterior wing and a thin solid line near the trailing margin. The fringe is concolorous with the ground color or lighter reddish gray, faintly barred. The orbicular and reniform spots are pale gray in outline surrounded by a few darker gray spots and filled with the darker adjacent gray or red-brown. The orbicular spot is quadrate and the reniform spot is broad, weakly kidney- or hourglass-shaped. The hindwing is pale gray with darker brown-gray shading on the distal wing, dark gray veins and thin terminal line. The hindwing fringe is white with a light brown-gray base. The head, base of the collar, and central thorax are dark gray to brown-gray. The rest of the thorax is lighter gray with faint barring on the collar and dark medial edges on the tegulae. The male antenna is filiform.

This species is similar to several other summer-flying Cucullia species but can usually be identified by the combination of dark gray color with dark gray and brown costa, relatively faint spots, and a dark gray hindwing. The most similar species is Cucullia florea. It has a less purple gray and streakier forewing, a gray costa without brown color. Cucullia postera is also similar to Cucullia omissa, but this species has a much smoother forewing. Cucullia montanae has a similar forewing to C. postera, although the spots are often more conspicuous, but its hindwing is much lighter white at the base with a gray marginal band.

This species is widely distributed in open meadows of cool, moist forests across Canada and western mountains.  In the Pacific Northwest, it is usually rare and sporadic, occurring in meadows and clear-cuts within high elevation spruce-fir forests.  This species is considered to be management sensitive, depending on disturbed openings and meadows in the forest.

Cucullia postera is found in forests of southern British Columbia and northern Idaho and in several mountain ranges further south. It occurs in the Cascades in Oregon and Washington but not further west. The range also includes the mountains of southern Idaho.

Cucullia postera is a typical boreal zone species that is found in a very narrow distribution near the border between southern Canada and the United States. The range extends south in the Rocky Mountains to northern Colorado. Seemingly isolated populations are found in southeastern Arizona and the Sierra Nevada of California.

This species is a foodplant specialist feeding on asters (Aster spp.) in the Asteraceae. It has also been reared from larvae collected on goldenrod (Solidago spp.) in Oregon (L. Crabo unpublished).

The flight period of C. postera is late spring and summer. It has been collected from May through August in our region. It is nocturnal and comes to lights.