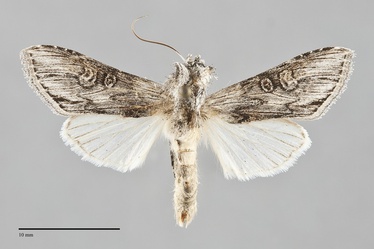 Cucullia basipuncta is a medium-sized moth (FW length 15 - 16 mm) that flies in extreme southeastern Oregon during the spring. It has a streaky light gray, pointed forewing with double-rimmed orbicular and reniform spots, visible transverse lines, a black anal dash. Males have a white hindwing. As in other members of the genus, the forewing is long and thin with a convex distal costal margin and a pointed apex, and the patagiae can be raised into a pointed "hood" that is most apparent when the moth is resting and is variably present in preserved specimens. The forewing is light gray, darker near the spots and on the costa distal to the antemedial line, in a triangular area on the distal wing below the apex, and along the trailing margin. The veins are black and dark gray lines are present in some of the interspaces to produce a finely streaked pattern. The distal costa is dark gray with a series of pale spots. A short black dash is present near the outer margin. The antemedial and postmedial lines are gray, strongly zigzagged across the wing below the cell. The terminal line is a series of black spots between the veins on the anterior wing and a solid black line on the posterior half. The fringe is the ground color with faint barring parallel to the margin. The orbicular and reniform spots are located near each other, occasionally touching, dark gray to black, double with similar components or with the outer line darker and thicker, filled between the lines and centrally with the ground color. The orbicular spot is round. The reniform spot is large, exceeding the width of the cell, broadly kidney-shaped. The other lines and the claviform spot are absent. The hindwing is pure white in males and uniform dark brown-gray with a white fringe in females. The head and thorax are light gray with dark gray barring across the head, collar, and tegulae. A short tuft of dark gray scales are present on the posterior thorax. The male antenna is filiform.

This species lives in low elevation deserts and has been found in a canyon in sage steppe in Oregon.

Cucullia basipuncta reaches its northern limit in southeastern Oregon where it has been collected in the Pueblo Mountains in Harney County.

This species is predominantly distributed well to the south of the Northwest in southern California, Arizona, New Mexico, and the southern parts of Nevada and Utah.

This species is a foodplant specialist feeding on desert herbaceous Asteraceae such as Stephanomeria spp.

The flight period of this species is the spring. It should be sought in late April and May in the Northwest. It is nocturnal and comes to lights.