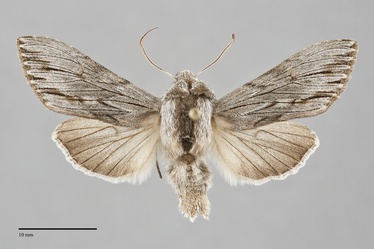 Cucullia strigata is a large moth (FW length 20 - 23 mm) that flies in the spring in steppe habitats and in the summer above timberline. It has streaky, pointed forewings that are marked with black lines on the distal wing. As in other members of the genus the forewing is long and thin with a convex distal costal margin and a pointed apex, and the patagiae can be raised into a pointed "hood" that is most apparent when the moth is resting and is variably present in preserved specimens. The ground color is variable, bluish brown-gray to blackish, usually slighter duller gray posterior to the cell basal to the postmedial line and lighter gray near the costa, on the distal wing, and in the fold in the median area. The veins are thin, black. Ill-defined brown-gray is present between the veins on the mid-wing near the outer margin. A thin black basal dash is present. Black lines are present on the distal wing, most prominent in the subterminal area below vein M2, at the margin below M3 and CuA1, and across both areas below CuA2. The antemedial and postmedial lines are diffuse dark gray. The antemedial line is strongly zig-zagged and is darkest and most irregular posterior to the cubital vein. The postmedial line is faint above the fold, and is sinuous and obliqued toward the base above the trailing margin. The fringe is slightly darker than the rest of the wing, usually weakly checkered with lighter gray at the base. The orbicular and reniform spots are usually absent, sometimes evident as light gray spots. The claviform spots and other lines are absent. The hindwing is light gray with darker gray outer margin and dark veins, discal spot, and terminal line in males, darker gray in females. The hindwing fringe is white with a tan and gray base. The head and thorax are blue-gray to brown-gray with barring on the collar and tegulae, a thin black line across the mid-collar, and dark brown-gray borders on the posterior collar and medial tegulae. The male antenna is biserrate.

This species is usually easily recognized by its early flight season and long pointed forewing marked with a series of black lines near the outer margin. It is most similar to Cucullia albida and Cucullia serraticornis, species that approach the Northwest from the east and south, respectively. These situations are discussed below. Montane populations of C. strigata fly during the summer at the same time as many other Cucullia species. They could potentially be confused with Cucullia intermedia, a common species with relatively unmarked gray forewings. It lacks the black streaks on the distal wing of C. strigata.

The relationship of C. strigata to Cucullia albida, a lighter colored but otherwise nearly identical moth that is found on the northern Great Plains is uncertain. Poole (1995) reports that the range of C. albida includes eastern British Columbia. We suspect that the Northwest and Great Plains populations represent geographical variation of a single species. This situation should be evaluated further near the border of Alberta and British Columbia.

Similarly, Cucullia serraticornis, a species that resembles C. strigata and is characterized by sexual dimorphism in the color of the hindwing color  - white in males and dark in females - approaches the Oregon border in northern California. Some males of C. strigata have pale hindwings, and this character is most prominent in southern Oregon. We suspect that C. strigata and C. serraticornis could also be the same species. Alternatively, these taxa could be distinct, but the records of C. serraticornis from northern California could be misidentifications of males of C. strigata. This situation is also worthy of further study in Oregon and California. The most likely place to find C. serraticornis in Oregon is at low elevations in the Siskiyou Mountains.

This species is widely distributed in dry open grasslands at low elevations throughout much of western North America.  In the Pacific Northwest, it is rare and sporadic in remnant prairies west of the Cascades, but is frequent to locally common in dry grasslands east of the Cascades. It occurs above timberline north of northern Washington.

Cucullia strigata is widespread on sage steppes in the interior of the Pacific Northwest as far north as the southern part of British Columbia. It occurs uncommonly on remnant prairies in the southern Puget Sound and Vancouver Island, as well as in the Willamette Valley in western Oregon. Alpine populations are known from northern Washington and in the Coast Range of southwestern British Columbia.

Cucullia strigata is found in central Alberta, southern Rocky Mountain region, and western Nevada to the south of the Pacific Northwest. Northern California records are shown on the Moth Photographers Group website but not in Poole (1995).

No information is presently available regarding larval foodplants of this species, but gum weed (Grindelia spp.) in the Asteraceae is strongly suspected based upon the habitat.