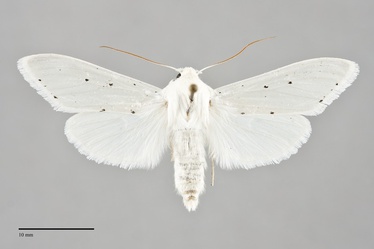 Cucullia luna is a distinctive, pure white, medium-sized moth (FW length 17 - 20 mm) that flies in southern Idaho during the summer. It has long, pointed forewings marked only by a few black dots on the veins. As in other members of the genus, the forewing is long and thin with a convex distal costal margin and a pointed apex, and the patagiae can be raised into a pointed "hood" that is most apparent when the moth is resting and is variably present in preserved specimens. The entire forewing is shiny pure white with markings limited to black spots on the basal, antemedial, postmedial, and terminal lines. The hindwing is also immaculate white, including the fringe, along with the entire body. The male antenna is filiform.

This species is unmistakable due to its distinctive elongate wing shape, satiny white wings with a few black spot on the forewing. The only moths with pure white wings that fly in its range are several tiger moths (family Erebidae, subfamily Arctiinae) which have colored lateral abdomens and/ or legs, and Protogygia album and Copablepharon spiritum in the subfamily Noctuinae. All of these species lack the characteristic wing shape and sheen of Cucullia luna. Leucoma salicis in the Erebidae, subfamily Lymantriinae, flies in forests and has broad rounded satiny white wings, lacks black spots, and has broad antennae.

This species is widely distributed on the short-grass and mixed-grass prairies of the Great Plains, and barely enters the eastern edge of the Pacific Northwest on dry sagebrush steppe.

Cucullia luna occurs on the Snake River Plain in southern Idaho in the Northwest.

The range of this species includes the Great Plains and the Great Basin. It occurs from central Alberta, Saskatchewan, and southern Manitoba south to South Dakota, Colorado, northern Arizona, and Nevada.

No information is presently available regarding larval foodplants of this species, but it probably feeds on herbaceous Asteraceae like related species.

The adults fly during the summer and have been collected in June and July in and near our region. It is a nocturnal species that comes to lights.