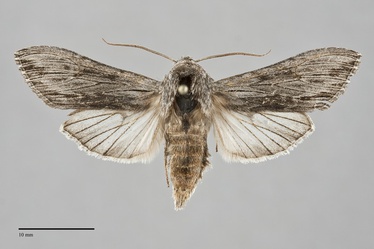 Cucullia serraticornis is a sexually dimorphic, large, streaky gray moth (FW length 19 - 22 mm) that flies in early spring in southwestern Oregon. It has dark lines on the distal forewings and hindwings that are white in males and dark brown-gray in females. As in other Cucullia species the forewing is long and thin with a convex distal costal margin and a pointed apex, and the patagiae can be raised into a pointed "hood" that is most apparent when the moth is resting and is variably present in preserved specimens. The ground color is light light blue-gray in males and hoary brown-gray in females. The distal wing is often lighter in females, and bears a series of black lines between the veins in both sexes. The veins are thin, black. A thin black basal dash is present. The antemedial and postmedial lines are diffuse dark gray faint except for the posterior postmedial line which forms an irregular dark S near the trailing margin. The fringe matches the adjacent terminal wing in color and is weakly checkered basally. The orbicular and reniform spots are usually absent, sometimes evident as light spots. The claviform spots and other lines are absent. The hindwing is slightly translucent white in males, with gray veins that are darkest near the outer margin. The fringe is white with weak gray checkering anteriorly. The female has a dark smoky brown-gray hindwing with a light gray fringe with a dark base. The head and thorax match the wing color in both sexes, with transverse barring on the collar. The central thorax is dark gray. The male antenna is biserrate.

This species can be recognized by its early flight season, long streaky wings, and - in males - white hindwings. Females could potentially be confused with Cucullia pulla but it is darker and has a more strongly checkered black and white forewing fringe and whiter hindwing fringe.

The relationship of this species to Cucullia strigata is unclear in the Northwest. The male hindwing of C. strigata is lighter in the southern part of the Pacific Northwest to the point where specimens resemble C. serraticornis from California. Poole (1995) shows the distribution of C. serraticornis north to Humbolt County, California just to the south of the Siskiyou Mountains of Oregon. It is possible that these names represent variation of a single species.

This species is endemic to dry low-elevation grasslands in California. The habitat is not precisely known in the Pacific Northwest, but it is likely that it occurs in grasslands in oak forest or on rocky serpentine barrens.

Cucullia serraticornis has been found in Josephine County in southwestern Oregon. Similar specimens are also known from Grant County in east-central Oregon.

Cucullia serraticornis is found in California where it has been collected most commonly in the southwestern part of the state and near San Francisco Bay. It is also found in central and southeastern Arizona.

No information is presently available regarding larval foodplants of this species, but it probably feeds on herbaceous Asteraceae like related species.

The flight season of this species is in late winter and early spring in California. Poole (1994) states that most records from northern California are from March.