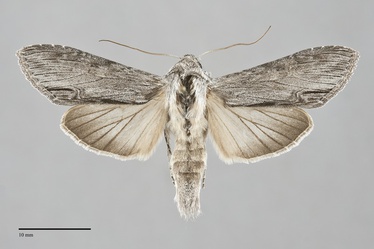 Cucullia florea is a large streaky gray moth (FW length 20 - 23 mm) that flies in forests throughout much of our region during late spring and summer. It has a long pointed forewing with a darker costa, trailing margin without brown or red color, faint spots, and dark marks near the anal angle. The forewing is long and thin with a convex distal costal margin and a pointed apex, and the patagiae can be raised into a pointed "hood" that is most apparent when the moth is resting and is variably present in preserved specimens. The color is medium-dark blue gray, darker near the costa and on the trailing margin, and lacking warm brown or red-brown tints. The pattern is streaked due to thin dark veins and a faint pale stripe between the veins on the distal wing. A very thin basal dash is present. A darker black dash is present near the anal dash, and there are several faint gray lines between the veins below the apex. A double C-shaped dark gray mark medial to the dash is a remnant of the postmedial line. The lines are nearly absent elsewhere. Both the antemedial and postmedial lines are evident as gray marks near the costa in some individuals, and segments of dark gray from portions of the antemedial line are sometimes visible on the mid-wing. The terminal line is a series of black lines that become confluent near the posterior wing. The fringe is gray with very faint logitudinal striations. The orbicular and reniform spots are usually faintly visible, with spotted faint gray outlines and several internal spots. The hindwing is medium-dark brownish gray with darker margin, veins, discal spot, and terminal line. The hindwing fringe is pale whitish tan with a light tan base. The head and base of the collar gray-brown. The central thorax is dark gray. The rest of the thorax is light gray with transverse barring on the collar and gray on the medial tegulae. The male antenna is filiform.

The predominantly western taxon obscurior Smith and the more eastern C. florea were considered to be distinct species by Poole (1995; Nearctica.com) with a broad blend-zone from Washington to Utah. According to him, florea is darker and has a purple-brown tint on the forewing that is lacking in obscurior. Obscurior has since been placed in synonymy with florea by Lafontaine and Schmidt (2010). We find no convincing evidence for more than a single species in our region and agree that obscurior is no more than a weakly-defined western population of C. florea.

In the Pacific Northwest, C. florea is often moderately common in subalpine meadows and clear-cuts within high-elevation spruce-fir forests.  This species is considered to be management sensitive in Oregon where it appears to be less common, depending on disturbed openings and meadows in the forest.

Cucullia florea is found in  forests in southern British Columbia, northern Washington, and the Idaho Panhandle. The range extends south along the east slope of the Cascade Mountains. It has also been found along the Pacific Coast and in the Blue Mountains in Washington.

This species occurs across the boreal zone of North America in a relatively narrow zone near the Canada-United States border. The range extends southward in the Appalachian Mountains to northern Georgia. The western distribution is wider, extending south through the Rocky Mountains to Arizona and New Mexico. It also occurs in the Sierra Nevada in California.

This species is a foodplant specialist feeding on a number of herbaceous Asteraceae including asters (Aster spp.), fleabanes (Erigeron spp.), and goldenrods (Solidago spp.).

The flight period of C. florea is late spring and summer, usually from late May through July. It is nocturnal and comes to lights.