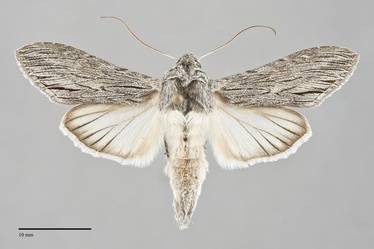 Cucullia dorsalis is a large moth (FW length 21 - 23 mm) that flies in sage steppe during late spring and summer. It has a pointed streaked gray forewing with markings limited to a black anal dash, and a white hindwing base. As in other members of the genus the forewing is long and thin with a convex distal costal margin and a pointed apex, and the patagiae can be raised into a pointed "hood" that is most apparent when the moth is resting and is variably present in preserved specimens. The forewing ground color is medium gray. The veins are thin black and the distal interspaces are lined with subtle pale and dark gray to produce a finely streaked pattern. A long oblique black dash is present on the distal wing below vein CuA2, with shorter dark lines between the veins on the adjacent mid-wing. A long thin black dash is present, resembling the veins. The antemedial and postmedial lines are faint thin gray and strongly zigzagged. The antemedial line is usually visible across the wing, while the anterior postmedial line is faint of absent except on the costa. The terminal line is a thin black line on the posterior wing. The fringe is slightly lighter gray than the ground with faint barring parallel to the margin. The anterior wall of the claviform is a thin black line is some specimens. The spots and other lines are otherwise absent. The basal hindwing is pearly pale whitish gray. The veins and thin terminal line are dark gray. Dark brown-gray is present near the outer margin in males and on the outer half of the wing in females. The hindwing fringe is white with a pale gray base. The head and base of the collar are gray. The rest of the thorax is similar to the wings, with a black line on the mid-collar and faint barring on the collar and edges of the tegulae. The male antenna is filiform.

This moth flies in dry low-elevation sage steppe. It is uncommon.

Cucullia dorsalis is found in the dry interior of Washington, eastern Oregon, and southern Idaho.

The range of C. dorsalis includes the Rocky Mountains region from southern Alberta to Colorado and New Mexico. It extends west through the Great Basin to include most of California.

This moth belongs to a group that are specialists feeding on herbaceous Asteraceae.

Adults fly during late spring and summer. They have been collected from mid-May to early August in the Pacific Northwest and might be double-brooded with peak flights in May and July. It is a nocturnal species that comes to lights.