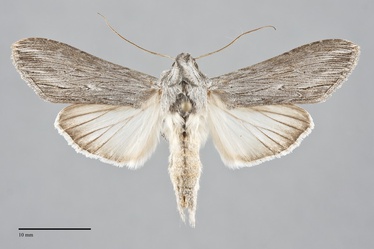 Cucullia speyeri is a large (FW length 21 - 22 mm), very finely streaked, pale gray moth that flies in deserts during the late spring and summer. It has forewing markings limited to a thin anal dash and a white hindwing with a thin dark border. As in other members of the genus the forewing is long and thin with a convex distal costal margin and a pointed apex, and the patagiae can be raised into a pointed "hood" that is most apparent when the moth is resting and is variably present in preserved specimens. The forewing is even light gray. The distal wing is lightly streaked because each interspace has a light gray line between the dark veins, and a few gray dark lines abut the wing margin on the mid-wing. A thin dash is present below vein CuA2 above the anal angle. A very thin black basal dash is thinner than the dark veins. The very faint gray antemedial and postmedial lines are evident posterior to the cell where they are deeply zigzagged between veins. The terminal line is a thin black line on the posterior wing. The fringe is the same color as the ground color. The anterior claviform spot is visible as a curved line in a few specimens. The other spots are absent. The hindwing is slightly opalescent white, dark gray near the outer margin in males and wider on the outer half of the wing in females. The hindwing fringe is white with a pale gray base. The head and base of the patagium is medium-dark gray, while the rest of the collar and tegula is lighter gray with thin gray barring. The central posterior thorax is also darker gray. The male antenna is filiform.

This species is widely distributed in open meadows, dry grasslands, and native prairies across most of North America. This species occurs on sagebrush steppe and in open ponderosa pine forests at low to middle elevations east of the Cascades in the Northwest.

Cucullia speyeri has a limited distribution in our area, in a narrow band that includes southern British Columbia and eastern Washington. It appears to be replaced by C. dorsalis in other steppe regions further south.

This species is found south of the boreal forest and north of the deep South from Alberta and Montana to the Atlantic Coast from New Hampshire to Virigina.

This species is a foodplant specialist feeding on herbaceous Asteraceae such as sunflowers (Helianthus spp.) and Conyza spp.

Cucullia speyeri flies during the late spring and summer, usually from early May until mid-July. It is nocturnal and comes to lights.