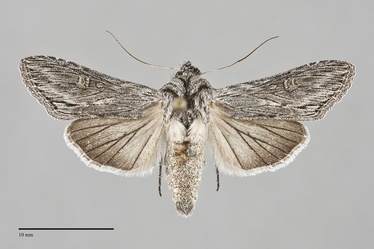 Cucullia eurekae is a medium-sized moth (FW 15 - 18 mm) that flies on high steppe in central Oregon during early summer. It has a finely streaked, gray, pointed forewing with dark orbicular and reniform spots placed near each other and a black anal dash. As in other members of the genus the forewing is long and thin with a convex distal costal margin and a pointed apex, and the patagiae can be raised into a pointed "hood" that is most apparent when the moth is resting and is variably present in preserved specimens. The ground color is dull dark gray. The veins are black, and thin dark gray lines are present in each interspace on the distal wing to produce a finely longitudinally streaked pattern. The cell between the spots is dark gray in some specimens. A short black dash is located near the anal wing. The antemedial and postmedial lines are gray, faint. The antemedial line is usually an ill-defined oblique mark on the costa, and very strongly zigzagged between the veins across the rest of the wing when visible. The postmedial line is usually absent, sometimes a dark mark on the costa or faintly visible as a strongly serrate mark near the trailing margin. The terminal line is a series of dark spots between the veins on the anterior wing and a solid black line on the posterior half. The fringe is of the ground color, with fine barring parallel to the outer margin. The orbicular and reniform spots are black, double with components similar or with the outer line thicker black, with filling between the lines and centrally of the ground color. The spots are located close to each other, occasionally touching. The orbicular spot is round to slightly oval and the reniform spot is large, exceeding the width of the cell, broadly kidney-shaped. The other lines and the claviform spot are absent. The hindwing is brownish gray, darker toward the margin, with dark gray veins and terminal line. The fringe is white with a brown-gray base anteriorly and all white near the anal angle. The head and base of the collar is striped medium-dark gray. The distal collar and the remainder of the thorax is lighter gray, also with darker barring. The posterior thorax bears a short tuft of dark gray scales. The male antenna is filiform.

This species is closely similar to Cucullia antipoda but is smaller and duller dark gray. When naming this species in the 1995 MONA fascicle Poole segregated a small group of small specimens with uniform dark dull gray from a large series of Cucullia antipoda collected at Euraka, Utah by Tom Spalding. He indicates that the largest of the spine-bearing diverticula in the male vesica is double in C. eurekae and single in C. antipoda. Poole admits that it is possible that these specimens represent the limits of variation in C. antipoda.

A population of small dark Cucullia in central Oregon appears to represent this species, although we have not dissected this material or submitted it for DNA sequencing (as of 2/2012). We note that Cucullia antipoda is relatively dark in the Northwest which could make the subtle differences between it and C. eurekae less apparent here than further south.

This species appears to be rare and sporadic in the southern part of the Great Basin in Utah and Nevada, but it is common in juniper woodlands, on sagebrush steppe, and on bunchgrass prairies across central Oregon.  This region comprises the "high desert" of central Oregon with an average elevation near 5000 feet.

This species has been collected at several sites in the Great Basin, including the type locality in central Utah, the adjacent parts of southwestern Utah and northwestern Arizona, and central Nevada.

No information is presently available regarding larval foodplants of this species, but it probably feeds on shrubby Asteraceae such as rabbitbrush (Chrysothamnus spp.).

The flight period of C. eurekae is June and early July.