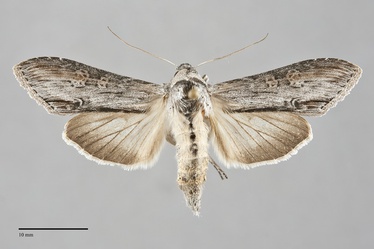 Cucullia similaris is a large moth (FW length 21 - 23 mm) that flies in mountain forests east of the Cascades during the summer. It has a long streaky gray forewing with a pointed outer margin, a dark streak along the trailing margin, and spotted outlines of the orbicular and reniform spots. As in other Cucullia species the forewing is long and thin with a convex distal costal margin and a pointed apex, and the patagiae can be raised into a pointed "hood" that is most apparent when the moth is resting and is variably present in preserved specimens. The ground color of the forewing is light bluish gray. The costa is darker gray with a slight red-brown cast near the apex, and the trailing margin is dark gray to black. The veins are thin and black, and the streaked appearance is further enhanced by dark gray and a few brown lines between the veins on the distal vein. An oblique dash is present near the anal angle, preceded by a C-shaped or S-shaped black and gray mark at the posterior postmedial line. The antemedial line is gray, incomplete, double with filling of the ground color, sinuous, most evident against the dark color of the costa. The postmedial line is irregular, barely evident, except as the light filling near the costa and the dark mark at the trailing described above. The terminal line is a series of black lines between the veins that are continuous near the trailing margin. The fringe is gray with very faint longitudinal barring. The orbicular and reniform spots are similar, outlined in dark gray spots and filled with the color of the adjacent wing and additional dark dots. Both spots are large. The orbicular spot is irregularly quadrate. The reniform spot is broadly kidney-shaped or weakly hourglass-shaped. The anterior claviform spot is a curved black line in some individuals or absent in others. The other transverse lines are absent. The hindwing is pale tan-gray with a slightly darker marginal band with a diffuse inner border that is wider in females, darker veins and thin terminal line. The hindwing fringe is white with a tan base. The head base of the collar are smoky gray. The collar is gray with fine transverse barring and a darker posterior edge. The tegulae are gray with dark medial edges. The central thorax is dark gray. The male antenna is filiform.

This species can be told from other Cucullia species by the combination of a gray forewing with dark anterior and posterior edges lacking significant brown color and distinctly spotted orbicular and reniform spots. Cucullia florea and especially Cucullia postera have similar forewing color but lack the prominently spotted outlines of the two spots. Cucullia montanae is also similar and has similar spots, but it has significantly more red-brown color near the costa and on the outer wing and a lighter hindwing than C. similaris.

This species is widely distributed in drier habitats at low to middle elevations throughout much of western North America.  In the Pacific Northwest, it is most frequent in juniper woodlands and ponderosa pine forests east of the Cascades, but is sometimes found on open sagebrush steppe.  It is usually rare and sporadic.

Cucullia similaris is found in the mountains of south-central British Columbia, in the Blue Mountains of southeastern Washington, and in the southern parts of Idaho and Oregon. It appears to be absent from higher elevations in the Cascade Range, but occurs in juniper woodlands along the east slope of the Cascades.

The range of this species includes northern California, northern Nevada, and the Four Corners States to the south of our region. It has a limited distribution further east, with a few scattered records from central Alberta, western Montana, and southern Wyoming.

No information is presently available regarding larval foodplants of this species, but it probably feeds on herbaceous Asteraceae like closely related species.

This species flies during the late summer, usually in July and August although some specimens have been found in late June. It is nocturnal and comes to lights.