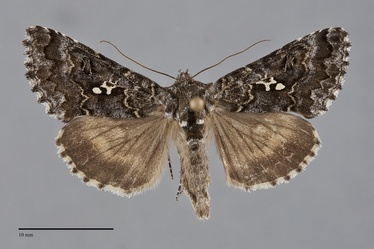 Syngrapha abstrusa is a small to medium-sized (FW length 13 - 16 mm) mottled dark gray moth that is found in southern British Columbia and northeastern Washington during the summer. It has silvery tints, an ornate silver stigma on the mid-forewing, and a brown and gray hindwing. The forewing has a slightly pointed shape, a slightly scalloped fringe and a small flange at the anal angle. It is mottled powdery dark gray, often with metallic silvery scales basal to the antemedial line and an sheen on the distal wing. A patch of lighter gray is usually present near the anterior postmedial line. The median area and distal subterminal area are dark blackish gray, sometimes with a small patch of reddish brown near the postmedial line in the fold and lighter blue-gray near the posterior margin. The stigma is silver-white, usually an irregular basal V and a separate lateral spot, less often fused together. The basal, antemedial, and postmedial lines are dark gray to black, filled with gray to silvery white. The basal line is spotty, black. The antemedial line is a black spot on the costa, interrupted by the cell, and black with light silver filling below the cubital vein where it is wavy and strongly curved toward the posterior base. The median line is diffuse, black, often evident on the costa and near the trailing margin. The postmedial line is jagged anteriorly and irregularly irregular posteriorly, slightly lighter near the costa. The subterminal line is thin pale gray and is preceded by a black and gray shade, darkest next to the line. It is very irregular with a broad tooth toward the margin below the apex and a strong W-mark near vein CuA1. The terminal line is a series of pale lunules preceded by black wedges and followed at the margin by small black dots. The fringe is checkered light and dark gray. The orbicular spot is pale, round, with dark gray filling. The reniform spot is hourglass-shaped, usually open toward the costa and trailing margin, thin and pale, surrounded by ill-defined black and filled with dark gray and black at the posterior end. The hindwing is gray-tan with light gray basal suffusion and darker gray veins, discal spot, and a wide poorly marginated marginal band. The hindwing fringe is white to buff with dark gray checkering. The head and thorax are powdery gray with long tufts on the posterior thorax. The dorsal abdomen bears additional tufts. The male antenna is filiform.

This species is closely similar to Syngrapha alias and can be told from most other gray Syngrapha species by its dark gray color and thick silvery stigma, lighter blue-gray or violet-gray with a thinner stigma in the other species. Lafontaine & Poole (1991) indicate that S. abstrusa is smaller than S. alias (FW length 15 -18 mm) with a paler posterior median area that reveals the dark median line and a thick stigma in which the lateral spot is usually fused to the remainder. Definitive identification requires examination of the genitalia. The distal valve of S. abstrusa is blunt, while that of S. alias is projected dorsad to resemble a foot, and the clasper is longer than in S. alias. The females differ in the relative proportion of the length and width of the ductus bursae, 5-6x as long as wide in S. abstrusa and 3-4x as wide in S. alias. Syngrapha octoscripta is also similar to these species, but has a thin stigma in which the lateral spot often forms a small circle and the red-brown patch in the median area is more prominent.

Larva is smooth with only two pairs of abdominal prolegs.  The color is green with prominent white dorsal and lateral stripes.  It is illustrated by Lafontaine & Poole (1991).

This species is widely distributed in cool spruce and pine forests across Canada, extending to the northern Rocky Mountain region. Lafontaine & Poole (1991) suggest that this species prefers drier habitats than S. alias.

Specimens resembling this species and S. alias were not dissected to confirm their identity (2/2012). Therefore, specimens were assigned to both species in the range shown for S. abstrusa in Lafontaine & Poole (1991) pending definitive identification.

The range of this species extends east in a narrow north-south distribution near the Canada-United States border. It ranges from southern Newfoundland to New York along the Atlantic Coast and has been collected relatively commonly near the Great Lakes region. An isolated record is shown for northern New Mexico in Lafontaine & Poole (1991).

This species is a foodplant specialist feeding on Pinaceae, particularly spruces (Picea spp.) and some pines (Pinus spp.).  The primary larval foodplant in the Pacific Northwest appears to be Engelmann spruce (P. engelmannii).

This species flies during the summer, usually from late June to mid-August. It is nocturnal and comes to lights.