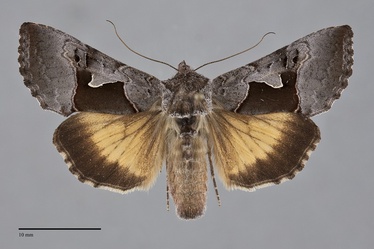 Syngrapha orophila is a medium-sized moth (FW 16 - 19 mm) that flies in mountain and boreal forests throughout most of the Northwest during the summer. It has a violet-gray and black forewing with a thin hook-shaped stigma and a yellow and black hindwing. The forewing has a slightly pointed apex, a slightly scalloped outer margin, and a small flange at the anal angle. Overall, the forewing is even violet gray in color. The distal subterminal area and terminal area is dark smoky gray, medial to the subterminal line and at the apex. On the posterior part of the forewing, this color is light smoky gray. The median area posterior to the stigma and cubital vein is velvety black. The stigma is silver-white, thin, horizontal, and open toward the costa with an asymmetrical V or fishhook shape. The basal, antemedial, and postmedial lines are gray, double filled with light gray-tan. The basal line is evident on the anterior wing. The antmedial line is prominent on the costa, interrupted by the cell, and smooth, strongly oblique toward the base, and incurved below the cell. The postmedial line is strongly convex lateral below the costa and then smoothly concave inward across the rest of the wing. The median line is a diffuse dark shade on the costa. The subterminal line is pale gray preceded by a darker shade, faint, mildly serrate between veins. The terminal line is pale gray medially with lateral gray bars between the veins. The fringe is gray checkered with dark gray. The orbicular spot is pale gray, faint. The reniform spot is paler gray, thin, irregularly surrounded by diffuse black lines on the median and lateral sides. The hindwing is ochre yellow with gray basal suffusion, discal spot, and veins. A moderately well-defined dark gray to black marginal band is present. The hindwing fringe has an ochre and gray basal row and an edge that is gray anteriorly and gradually lightens to white at the anal angle. The head and collar are brown-gray. The rest of the thorax is gray, with loose tufts of long scales posteriorly and on several abdominal segments. The male antenna is filiform.

This species can usually be recognized by its relatively large size, yellow and black hindwing, and thin stigma that may have a very short lateral spur at the posterolateral angle but lacks a long extension or adjacent spot. The most similar species is Syngrapha borea, which occurs south to northern Washington. It is similar in most regards but is smaller, has a golden yellow spot near the anal angle of the forewing that S. orophila lacks, usually has a longer lateral extension or satellite spot at the lateral stigma, and has a tuft of brown hairs on the thorax that is gray in S. orophila. Syngrapha diasema, a species that is only found in northern British Columbia, is also similar but has a pale tan hindwing rather than yellow as in S. orophila.

This species is moderately common in subalpine spruce-fir forests at high elevations.

The distribution of this species is centered in the Pacific Northwest. It also occurs in the adjacent Alaska Panhandle, northwestern Wyoming, and northern California.

This species is a foodplant specialist feeding on huckleberries (Vaccinium spp.) in the Ericaceae.

The flight period of S. orophila is the summer, usually from late June through August. It is a nocturnal species that comes to lights.