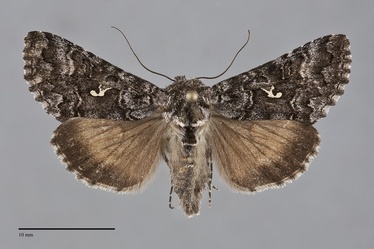 Syngrapha angulidens is a small to medium-sized (FW length 14 - 16 mm) mottled dark gray moth that flies in subalpine forests in most of our region during the summer. It has a silver-white stigma on the mid-wing and a brown and gray hindwing. The forewing has a slightly pointed apex, weakly scalloped margin, and a small flange at the anal angle. The color is mottled powdery gray with a slight blue or purplish tint. The median area is slightly darker than the rest of the wing, and there is a dark gray shade abutting the subterminal line in the distal subterminal area. The stigma is white or cream but not yellow, usually comprised of two parts, a squiggly basal V and a small round or slightly oval lateral spot. Uncommonly, these parts are fused, or the spot is absent. The basal, antemedial, and postmedial lines are gray, double, with filling of the ground color or slightly lighter gray. The basal line is evident on the anterior two-thirds of the wing. The antemedial line is present on the costa, absent through the cell, and scalloped, oblique, and strongly incurved below the cubital vein. A diffuse dark gray median line is present. The postmedial line is irregularly irregular, strongly drawn toward the base on the costa and nearly perpendicular to the trailing margin across the rest of the wing. The subterminal line is thin and pale gray, strongly irregular with teeth toward the outer margin below the apex and near vein CuA1, most evident due to the preceding dark shade. The terminal line is pale gray with dark spots between the veins. The fringe is checkered gray and dark gray. The orbicular spot is ovoid, pale gray filled with dark gray peripherally and central filling of light gray. The reniform spot is thin, pale gray, hourglass-shaped with central filling of the adjacent wing color and dark gray in the lower portion. The hindwing is dark gray-brown with gray basal suffusion and dark gray veins, discal bar, and marginal band with an indistinct inner margin. The hindwing fringe is pale tan with gray checkering. The head and thorax are mottled gray with light gray edges on the collar and tegulae. Long tufts are present on the posterior thorax and several abdominal segments. The male antenna is filiform.

This species resembles four other gray Syngrapha species with which it occurs in the Northwest. It is most likely to be confused with Syngrapha celsa because it is the most common Syngrapha in our region. It is slightly larger (FW length 15 - 19 mm) and usually has a dark shade on most of the median area that extends to the anal angle that is lacking in S. angulidens, and its stigma is distinctly yellow or light yellow-green rather than white. Syngrapha alias and Syngrapha abstrusa are more charcoal gray than S. angulidens and have thicker and more ornate silvery stigmas. Syngrapha octoscripta has a rusty-brown patch in the distal median area that S. angulidens lacks, and the lateral spot in its stigma is often a circular rather than filled in with silver.

This species is common and widely distributed in the Rocky Mountains and northern Cascades, where it occupies subalpine forests of spruce and fir. This species is usually found at higher elevations than the similar species S. celsa.

The ranges of S. angulidens and S. celsa overlap in the Northwest but diverge further south, with S. celsa near the Pacific Coast and S. angulidens in the Rocky Mountains. The range of S. angulidens extends to the mountains of eastern Nevada, eastern Arizona, Colorado, and southern New Mexico.

This species is a foodplant specialist feeding on conifers (Pinaceae).  In the Pacific Northwest, the primary larval foodplants are subalpine fir (Abies lasiocarpa) and Engelmann spruce (Picea engelmannii).

Syngrapha angulidens flies during summer, usually in July and August. It is nocturnal and comes to lights.