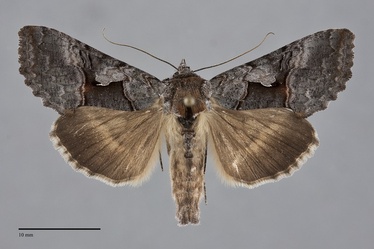 Syngrapha epigaea is a large Syngrapha (FW length 17–19 mm) that flies in forests throughout much of our area during the summer. It has a gray forewing with a dark brown-black and rusty-brown median area below a thin silver stigma. The forewing is relatively long with a pointed apex, scalloped outer margin, and a prominent flange at the anal margin. The color is even steel-gray, slightly darker on the distal wing. The median area below the stigma and reniform spot is velvety brown black anteriorly fading to gray near the trailing margin with a rusty brown patch near the postmedial line below the distal stigma. The stigma is a silvery-white thin sinuous horizontal line, slightly thicker at the tip, without spurs or ornate features. The transverse lines are gray, relatively inconspicuous except as dark marks on the costa and as the borders of the dark median area. The antemedial and postmedial lines posterior to the cubital vein have brown-gray components opposite the median area. This portion of the antemedial line is obliqued toward the base toward the trailing margin, usually with a slight bend near vein 1A+2A. The lower postmedial line is slightly inwardly concave and slightly waved between the fold and the posterior margin. The subterminal line is pale, irregular, usually only evident near the apex but sometimes complete across the wing. The terminal line is faint, scalloped parallel to the outer margin. The fringe is concolorous with the terminal area. The reniform spot is thin and pale, surrounded by patchy black, a tilted upright bar. The orbicular spot is absent or very faint. The hindwing is warm grayish tan, darker gray toward the outer margin, with gray veins and a thin postmedial line. The hindwing fringe is pale whitish gray with a checkered yellow-tan and gray base. The head and thorax are gray with dark transverse lines across the collar and tan tufts on the posterior thorax. Additional gray tufts arise from several dorsal abdominal segments. The male antenna is filiform.

Many Syngrapha species are similar superficially. This species can be recognized by its dark brown-black and rusty median area and thin linear stigma. The most similar species is Autographa ampla which has a solid black median patch, a deeper V-shaped stigma, and black spots at the apex and anal angle in the terminal area that S. epigaea lacks. This species could potentially be confused with Syngrapha surena, a very rare moth that has been collected in central British Columbia. S. surena has a very broadly V-shaped stigma that separates anterior silver-gray and posterior dark gray portions of the medial forewing.

Larva is smooth with only two pairs of abdominal prolegs.  The color is green with thin white dorsal lines and a broader white lateral line.  It is illustrated by Lafontaine & Poole (1991).

This species is widely distributed in moist forest and bog habitats.  In the Pacific Northwest, it is uncommon to rare in coastal rainforests at low elevations west of the Cascades, and in high elevation forests of the mountains.

Syngrapha epigaea is found in forests across southern British Columbia and northern Washington, extending south to the west of the Cascade Crest to the Siskiyou Mountains of southern Oregon. It occurs in the Cascade and Coast Ranges. The range includes the Blue Mountains in northeastern Oregon, the Idaho Panhandle, and western Montana in the northern Rocky Mountain region.

The species is found across northern North America from central Yukon, British Columbia, and western Alberta to Newfoundland. The southern limits of the range in the East are the Great Lakes region and southern New England. An isolated Colorado record is shown in Lafontaine & Poole (1991) but this species appears to be rare south of Montana.

This species appears to be a foodplant specialist feeding primarily on huckleberries (Vaccinium spp.) in the Ericaceae, but will feed on other plants late in the season.

In the Pacific Northwest adults fly from early July to early September. It is nocturnal and comes to lights.