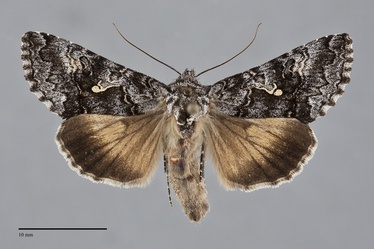 Syngrapha celsa is a common and widespread mottled blue-gray medium-sized moth (FW length 16–19 mm) that flies in conifer forests throughout our region during the summer. It has a darker gray-to-black posterior wing distal to the antemedial line and a light greenish-yellow stigma. The apical forewing is fairly long and pointed, the outer margin is smoothly convex, and there is a flange at the anal angle. The ground color is powdery mottled blue-gray. A large portion of the mid-wing is shaded darker gray to sooty black, including the entire median area posterior to the cell extending to the costa near the median reniform spot, the posterior half of the subterminal area, and the terminal area at the anal angle. The distal subterminal area and apex are also darker gray, but usually slightly lighter than the lower median area. The stigma has a distinct light yellow or yellow-green tint and is variable in shape. It typically has a thin horizontal fishhook-shaped basal part and a lateral round to oval spot that is fused to the posterolateral limb of the basal part in the majority of specimens. The lateral spot is circular in a few specimens. The basal, antemedial, and postmedial lines are double, gray, with filling of the ground color or slightly lighter gray. The basal line is evident on the anterior two-thirds of the wing. The antemedial line is slightly irregular, interrupted in the cell, slightly incurved with a focal tooth toward the base on vein 1A+2A near the trailing margin. The median line is gray, diffuse and faint except in specimens with relatively pale median areas. The postmedial line is mildly irregular, focally drawn toward the base on the costa and nearly straight at a slight inward angle toward the trailing margin. The subterminal line is pale gray preceded by a dark gray line and shade, irregular with a lateral bulge below the apex and a strong W-mark centered on vein CuA1. The terminal line is pale gray medially and dark gray laterally between the veins. The fringe is moderately to strongly checkered with pale to medium gray and dark gray. The orbicular spot is round or oval, diffuse light gray with dark gray peripheral and light gray central filling. The reniform spot is weakly figure eight-shaped, thin light gray with adjacent diffuse dark gray and variable filling, usually the color of the adjacent wing with dark gray in the lower portion. The hindwing is gray-tan with gray basal suffusion, discal spot, veins, and broad marginal band with an indistinct inner border. The hindwing fringe is pale tan with a darker base, gray median line, and gray checkering. The head and thorax are mottled blue-gray with darker gray barring on the collar and edges on the tegulae. Long tufts are present on the posterior thorax and several abdominal segments. The male antenna is filiform.

This species is the most common and widespread of several similar gray Syngrapha species in the Northwest. It can usually be recognized by its fairly large size, blue-gray color lacking a rust-red patch in the median area, ill-defined dark shade on the posterior wing, and yellow to slightly greenish stigma. It is most likely to be confused with Syngrapha angulidens, a species that occurs at high-elevation forest to central British Columbia, and Syngrapha interrogationis, a rare species from northern British Columbia. Syngrapha angulidens is slightly smaller than S. celsa (FW length 14–16 mm), has a more mottled forewing that lacks a dark central area, a whiter stigma that is most often separated into two parts, and a browner hindwing. Syngrapha interrogationis is closely similar in external appearance. It has a smoother forewing with less conspicuous darker area, a silvery stigma that lacks strong yellow tints with a thinner and more irregular basal portion, and its postmedial line is more finely and regularly scalloped. The yellow stigma of S. celsa could potentially cause confusion with Syngrapha viridisigma, a slightly larger species that occurs with S. celsa in some regions, but its stigma is clearly bright green. Autographa californica, an abundant ubiquitous species, is gray and has a stigma. It differes in many details of wing pattern, including the presence of a black line across the anterior portion of its subterminal area that S. celsa lacks. Specimens from the northern limits of the range of S. celsa could potentially be confused with Syngrapha surena, a very rare moth. It has a simple broad V-shaped stigma that separates the anterior silver gray and posterior darker gray parts of the medial forewing.

This species is common to abundant in most types of coniferous forests.  In the Pacific Northwest, it is common in coastal rainforests at low elevations, in montane spruce-fir forests at high elevations, and in ponderosa pine forests at middle elevations east of the Cascades.

This species is widespread and common in forests from west-central and southern British Columbia south through Washington and Oregon. It also occurs in northern and central Idaho. The range narrows to the western part of Oregon in the southern part of our region.

Syngrapha celsa is predominantly a West Coast species. The range extends south through California where it occurs throughout the Sierra Nevada and on the northern and southern coast. There are isolated records from further east, including in northeastern Nevada and the adjacent portions of northern Arizona and New Mexico.

This species is a foodplant specialist feeding on conifers (Pinaceae), but it is a foodplant generalist within the Pinaceae.  Foodplants include Douglas fir (Pseudotsuga menziesii), western hemlock (Tsuga heterophylla), various spruces (Picea spp.), various true firs (Abies spp.), and various pines (Pinus spp.).  In the Pacific Northwest, it is particularly associated with true firs at high elevations in the Cascades, and with ponderosa pine (P. ponderosa) at moderate elevations on the east side of the Cascades.

The flight period of S. celsa is the summer from June to September. Collection records from the Northwest peak in July and early August. It is nocturnal and comes to lights.